Seth MacFarlane Reveals His 20 Favorite ‘Family Guy’ Episodes, And The One Episode That Tops Them All 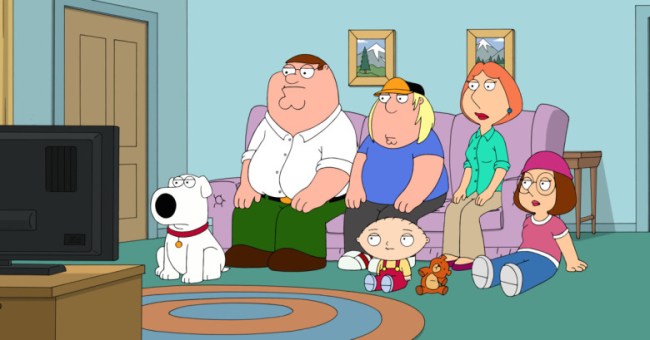 Family Guy celebrated its 20th anniversary back in January, a giant feat seeing as it was canceled by Fox after season two then canceled again following season three. But the animated series powered on thanks to its razor sharp writing and growing rabid following.

Hey so Family Guy premiered 20 years ago today on Fox. After several cancellations, multiple time slots and a lawsuit from Carol Burnett, we somehow still exist! Here’s to still existing!

With the nearly 330 episodes that have aired since its inception in 1999, MacFarlane recently dished on the 20 episodes he believes to be the greatest, and the one that tops them all.

MacFarlane: This episode featured our dear friend, the wonderful Frank Sinatra Jr. It’s also when I realized that if you have songs in an episode, you have to write way less.

MacFarlane: This was the first Stewie/Brian road show we ever did, and it’s the first episode that firmly established their unique relationship. It was our fresh take on the classic old trope of a dog and a baby hitting the road together.

MacFarlane: A fun premise and a great-looking episode. This was our first real foray into a non-traditional format.

“Road to the Multiverse”

MacFarlane: Back before Walt Disney’s Family Guy was a real thing, it was a fake thing.

MacFarlane: This episode was the culmination of our completely wholesome, non-sexual relationship with the FCC.

MacFarlane: This was a brilliant episode and just so Twitter knows, I was out with the flu the day they came up with the title.

MacFarlane: This was our homage to Herman Wouk’s ‘The Winds of War.’ And sadly, if you’re an American male under age 35, studies show this episode is all you know about World War II.

“I Dream of Jesus”

MacFarlane: The bird is still the word.

MacFarlane: This episode won us an Emmy for its musical number. Before that, none of us had ever seen an Emmy before.

“Back to the Pilot”

MacFarlane: It was fun to revisit and era before I hired people who could draw better than me.

MacFarlane: This was based on a story I wrote in college. The A.V. Club gave this episode a B, which is their highest rating I think.

“Road to the North Pole”

MacFarlane: My dad’s in this one.

MacFarlane: We wanted to see if our characters were interesting enough to sustain a full episode in one room, without gags or cutaways. In Hollywood, this is called a “bottle episode,” because it only utilizes one set, and also because the writers were drunk.

MacFarlane: Our first episode back from cancellation. It was a comedic riff on a Hancock classic, complete with a Bernard Herrmann score. This is the type of whip-smart, nuanced writing I was capable of 10,000 drinks ago.

MacFarlane: This episode is what finally put Star Wars on the map.

As for the episode MacFarlane is most proud of, it is the Clue parody in the season 9 premiere, titled “And Then There Were Fewer.”

MacFarlane: I think this is my favorite episode of the series. A classic format, great-looking direction, and, I hope, a genuinely surprising ending. It was also the first episode to air in HD. It was really cool to finally see Lois’ pores.