Seth Rogen, Adam Richman, And Kelly Kapowski Break Down The Best Burgers In The City Of Angels 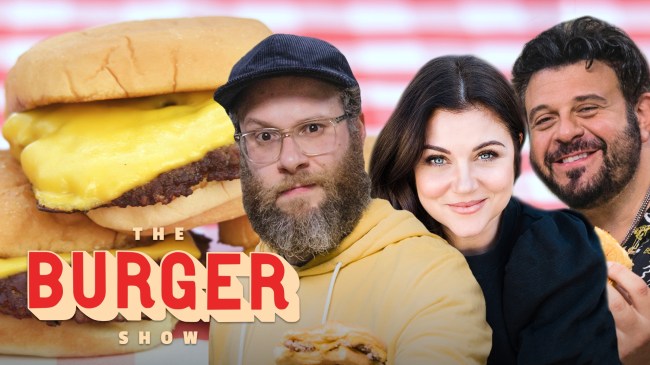 It’s borderline pathetic how comfortable I’d be with spending every waking hour of my days just seeking out the best burgers, eating them, and discussing those burgers. Within the Wide World of Gastronomy, I think the only things I’m equally as passionate about as burgers are NYC steakhouses, tacos (nationwide), and regional barbecue.

But we are here to learn about the best damn burgers in Los Angeles. The Burger Show from First We Feast is BACK for Season 5 today and they kick it off with some big names as guest judges to determine what the best burger in the City of Angels is.

Comedian/Actor/Director/Writer Seth Rogen sits with fellow Tottenham Hotspur fan Adam Richman who is best known for Man vs. Food and Tiffani Thiessen who played Kelly Kapowski on Saved By The Bell (also has a cooking show + cookbooks) to judge a panel of LA’s best burgers.

As high-profile Angelinos and foodies, they give expert opinions on what defines the quintessential Los Angeles hamburger and they go on to determine which is the best alongside The Burger Show host.

In the end, it was down to three burgers for them to choose from: the Smashburger from Tripp Burgers, Bistek Burger from LASA, and a Classic Single Burger from Everson Royce Bar…Unfortunately, I’m pretty useless in this discussion as I’ve never sampled any of these three burgers. If this was about burgers in NYC I could give my two cents but I haven’t had a burger in LA in forever.

In the end, they all seem a little torn on the best burger in Los Angeles. Seth and the host are torn between the first and the last.

If you’re in the area and want to sample this burger yourself, you’ll find Tripp Burgers located at 458 S Sepulveda Blvd. Their Yelp listing is here.

As a final note here, if you live in a large city (or near one) and see one of these ‘Burger Bash’ style events pop up on your radar these are by far the best and easiest way to sample all of these burgers from the best restaurants in the country, restaurants that usually have long lines to get those burgers. You can try a lot of them on the same day and the lines are considerably shorter.