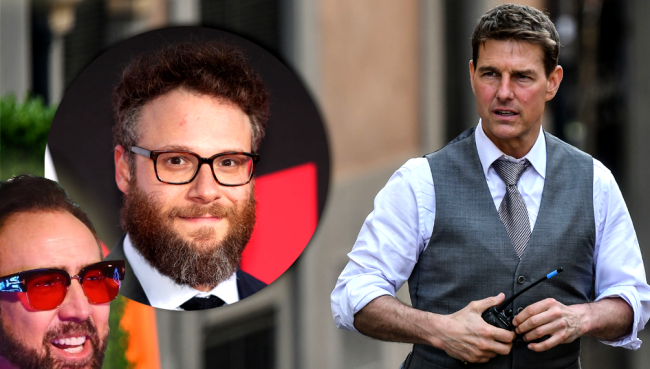 Being such a big star these days, Seth Rogen gets to rub shoulders with some of the most popular actors of this generation. However, not all of those encounters with Hollywood bigwigs end up going smoothly.

During his appearance on The Howard Stern Show this week, Rogen spoke about his meetings with two giants in the world of acting, Tom Cruise and Nicolas Cage, and both of them, as one might expect, were very weird.

Rogen’s strange encounter with Tom Cruise naturally revolved around the megastar trying to recruit him into Scientology.

He says he was lucky to have had Judd Apatow with him when Cruise started his pitch because, “I’m generally a weak-willed, weak-minded person. I would assume on the grand scale of people if they got [Tom], what chance do I have?”

However, as weird as that interaction was, it pales in comparison to Rogen’s run-ins with the legend that is Nicolas Cage.

Back in 2011, Rogen met with Cage about a possible role in the film The Green Hornet.

During a call to discuss the role, Cage informed Rogen that he wanted his character to be bald, with tattooed hair.

“And we were like, ‘Okay…’ We were kind of wrapping our heads around it,” Rogen recalled.

Then, a few days later, Cage called him back to say he changed his mind about the character having tattooed hair in the film because was considering doing it in real life.

“And I remember laughing hysterically when he said it on the phone, and then stopped, realizing it wasn’t a joke,” said Rogen, who then added that Cage had also requested his character be a “white Bahamian man.”

This led to a meeting at then-Sony chairwoman Amy Pascal’s home.

“Literally within 60 seconds, we were all seated at the house as he stands in front of us reciting a monologue, talking in a Jamaican accent,” said Rogen. “And we were just like, ‘It’s happening.'”

Rogen wasn’t done. He then said, “[His] monologue was not in the script. Nor did it have anything to do with the script. At which point I was like, ‘I don’t think he’s even read the script.'”

After his unusual presentation, Rogen says Cage acted “like he had just completed a backflip and he’s waiting for the applause. At which point everyone looks to me to express the group reaction.”

Then, when they all sat down for dinner “almost right away he just gets up and leaves.”