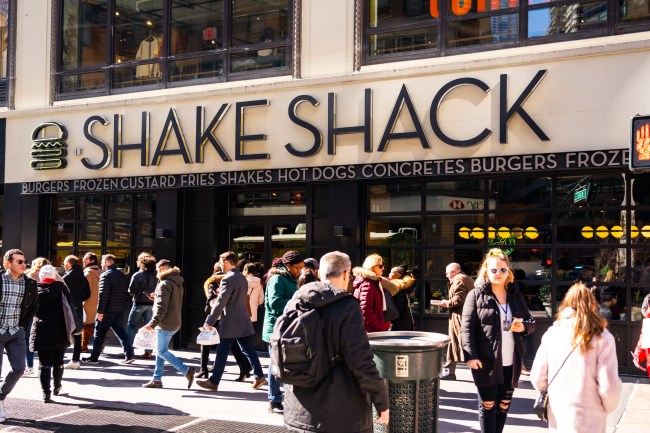 When the cookies are passed, you take a cookie. You don’t ask someone to pass you the plate, take a cookie, realize there are people out there without cookies, and then put the cookie back. You know why? Because then, everyone else who took a cookie feels like a total dick. And then they hate you. Because they have to put their cookie back too, or else the non-cookie people throw bricks through their windows.

NBC News– Shake Shack, one of several large restaurant chains that got federal loans through the coronavirus stimulus law meant to help small businesses, said Sunday night that it is giving all $10 million back.

But they said they had no idea the fund would dry up so quickly, so after they were able to secure separate funding last week, “we’ve decided to immediately return the entire $10 million” so restaurants that “need it most can get it now.”

This feels like a publicity stunt. Sorry, but you’re telling me that they applied for the loan, got it, and then realized that they didn’t need it as much as other restaurants, so they returned it? I might have fallen for that back in ’96, when we could detect the internet’s heartbeat but couldn’t tell its gender yet. Since then, I’ve digested too much information, watched too many Joe Rogan clips to fall for that.

My guess is that Danny Meyer and the rest of the Union Sq Hospitality Group foresaw that returning a $10 million government loan would look just peachy these days. And also that $10 million wasn’t going to move the needle much at all for a company with almost 200 US locations. Headache central.

Either that or it occurred to them how bad the optics were that they, a chain of 189 restaurants, had qualified as a “small business.” Shake Shack is fucking ubiquitous now. I don’t begrudge them that; their burgers are magnificent. But you used to have to travel for them. It used to be a fun activity for the day, to go wait in line at Shake Shack! Remember when that was exciting? Before they had them in airports and truck stops? Before their bathrooms became safe zones for needle sharing?

If I’m wrong, good for them and shame on me. But I’m not wrong.