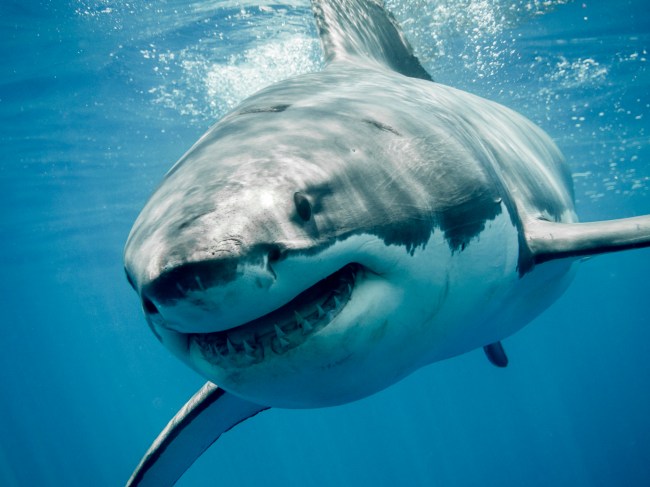 The ocean is a terrifying, fragile place filled with remarkable creatures. It’s a ecosystem of chaos, order, and balance – an important ballet for sustaining life on this fragile planet.

Two creatures at the very top of the food chain: Sharks and dolphins. Both are just looking to eat, survive, and thrive. Except, in the instance of Mr. Shark, it’s natural instinct is to prey on the vulnerabilities of Mr. Dolphin for an easy meal ticket when it can. It just can’t help itself.

Earlier this summer, we posted a video of a monster Great White Shark massacring a dead dolphin off Padaro Lane in Santa Barbara, California.

This incident is the East Coast version of that video, which was captured on Brant Beach in Long Beach Island, New Jersey.

A sick dolphin found its way close to the shore break by the beach. A hungry shark violently thrashed through the water to feast while morning beachgoers watched on, alerting beach patrol and a nearby marine biology center. The dolphin wasn’t able to defend itself with its usual maneuvering – IE. ramming its bottlenose into the shark’s gills like an MMA fighter’s uppercut. So the shark feasted until the water just past the wave break turned red.

According to NJ.com, a marine researchers weren’t able to determine what kind of shark attacked the dolphin because it left no crumbs from the meal to wash up on the shore.

It ate the thing clean.

If sharks can pulverize a defenseless dolphin like that so easily, kinda makes you rethink a post-lunch afternoon swim?

Live every week like it’s Shark Week, especially if you’re heading to the beach this summer.

Apologies ahead of time for the vertical video.