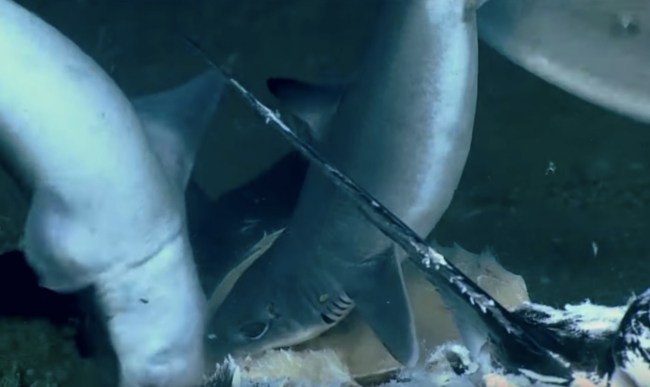 Crazy things happen in the darkness of the ocean. Truthfully, there’s really no way to know what happens at the bottom of the sea without sending submersibles and/or cameras down there with lights powerful enough to illuminate the darkest places on the planet.

As we saw a few years ago in the BBC’s Blue Planet II, when scientists make the journey into the unknown they often find some pretty cool shit. This adventure isn’t as high-budget at Blue Planet II was but the footage is just as gnarly.

This footage comes from the NOAA Office of Ocean Exploration and Research. It was taken somewhere around 80 miles off the coast of South Carolina in a region of the seafloor marked by a ‘series of rocky outcrops’.

Things start off intense with some small to medium-sized sharks devouring an estimated 8-foot-long swordfish. It’s not every day you see a swordfish getting shredded to pieces by sharks, is it? Things get REALLY intense when a large grouper comes along and swallows one of the sharks in half before taking down the entire shark for dinner.

The swordfish was clearly recently deceased, perhaps only by a few hours, given the condition of its body and the rapid disappearance of its flesh into the stomachs of the sharks. The cause of the death of this majestic animal is unclear, perhaps owing to age, disease, or some other injury. There was no visible hook or trail of fishing line suggesting this was a lost catch. However, any type of injury would have been masked by the massive damage caused by hundreds of shark bites.

The sharks represent two species of deep-sea dogfish from the family Squalidae. The smaller and more numerous animals are now known as Genie’s dogfish, a species only described in 2018, and named in memory of the famous shark scientist Dr. Genie Clark – the “Shark Lady” of Mote Marine Laboratory. At least two of the larger sharks are roughskin dogfish. Both species occur in deep waters along our continental margin, at depths from approximately 213-610 meters (700-2,000 feet). The large bony fish (not a cartilaginous fish like sharks), is a wreckfish, also a deep-sea species.

They go on to say that the large Wreckfish was unable to feed on the swordfish but was able to get in a meal by feasting on one of the sharks that was feeding on the swordfish.

I’m amazed that members of the Deep 2019 Expedition Team kept their composure while watching this feeding frenzy because I would’ve been dropping F-bombs left and right. The entire situation started off insane with 11 sharks tearing into the flesh and muscle of a swordfish and it went from insane to LUDICROUS when the Wreckfish swallowed the shark.

I feel like I say this often, but if this was a full-blown TV channel with HD cameras always running at the bottom of the ocean at some deep-sea reef, then I’d have my TV tuned to that channel almost all day every day. This is infinitely more entertaining than A LOT of the TV I see when flipping through the guide.