The First Reactions To Marvel Studios’ ‘She-Hulk: Attorney At Law’ Are In 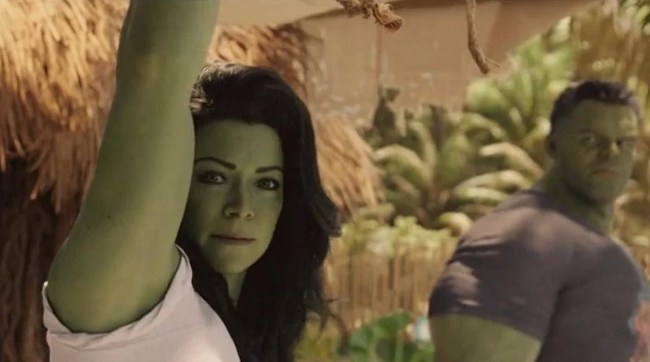 Set to premiere on Disney+ in just a couple of days on Thursday, August 18, the first reactions to the new Marvel Cinematic Universe series She-Hulk: Attorney at Law from various critics and journalists have hit the internet and the reception seems to be largely positive.

The first reactions to Disney+’s She-Hulk: Attorney at Law have hit the internet

Personally, I didn’t check out my She-Hulk screeners until Monday: the last day they were available prior to the embargo lifting. Not sure if that speaks to overall MCU apathy or lack of interest in the project itself. That said the series is fun/charming enough and an enjoyable, tongue-in-cheek, meta change of pace for the MCU.

Weirdly, that meta-ness includes making fun of the MCU’s cameo obsession… which it then relies upon. This leads me to my ultimate takeaway: the Hulk discourse is going to be off the charts. The character has been utterly ground down to one-dimensional shallow comedic relief. Like I’m 95% sure he says “bruh” at one point.

Have seen #SheHulk and thoroughly enjoyed it so far. Tatiana Maslany plays the role perfectly and the supporting cast all have their moments to shine. The series isn’t for everyone but can see it having a strong following.

Marvel’s #SheHulk is a VERY funny legal procedural that’s lighter on action, but heavy on breaking the fourth wall. This is the most self-referential the MCU has ever been. Cameos & references galore + a dynamite Tatiana Maslany performance. Also, Tim Roth rules! pic.twitter.com/Sx3cDTVUa4

#SheHulk is another hit for Marvel. The cast, especially Tatiana Maslany, is great and the show itself is very funny. While the show plays it safe and doesn't take big risks, I still had loads of fun with it. Can't wait to see the rest!@MarvelStudiosCA @SheHulkOfficial pic.twitter.com/34AJ9ERc1L

I’ll start out my thoughts on #SheHulk by saying Tatiana Maslany as Jen Walters is an absolute revelation. The first episode is a bit of a slow burner, but the show grows stronger with every instalment. The mid credit scenes are perhaps the most amusing ones in Marvel history. pic.twitter.com/qHz7NRGGcN

Pleasantly surprised by #SheHulk! Been a lil harsh on the trailers but seeing everything in context makes a big difference. As expected, VFX is a mixed bag — impressive in some scenes, super off in others — but it plays well enough thanks to a strong assist from Maslany's work. pic.twitter.com/DWdkmS1770

#SheHulk is a lot of fun and probably the first #mcu #DisneyPlus since WandaVision that isn’t afraid to push boundaries outside what’s expected. That fact, and it’s comedy are two of the show’s biggest assets, what also works is how connected it feels to the rest of the MCU

#SheHulk is simply stellar. It starts off fast,really fast, but as it went on it grew on me, and is easily one of my favorite MCU shows. The setting is pretty grounded but it does a great job at establishing itself in the MCU in a way that’s both respectful to the MCU, 1/2 pic.twitter.com/NCJPM1D5Le

I've seen the first 4 episodes of #SheHulk and this thing is basically firing on all cylinders for me. Tatiana Maslany is pitch-perfect and Jennifer's relationship with her cousin Bruce is so relatable. It's incredibly charming and, most important, you care about Jen so much. pic.twitter.com/ViNTIImd7C

#SheHulk rules incredibly hard. Feels like the most "TV show" of Marvel shows so far (mean that in the best way possible). Genuinely hilarious, Tatiana Maslany kills it, and it makes excellent MCU connections w/out feeling weighed down by it all. A ridiculous amount of fun. pic.twitter.com/kdGC3vWyJ9

Later this year, Marvel Studios will also release Black Panther: Wakanda Forever, The Guardians of the Galaxy Holiday Special, and a still-unannounced Halloween special, which many fans believe will be an adaption of Werewolf by Night.