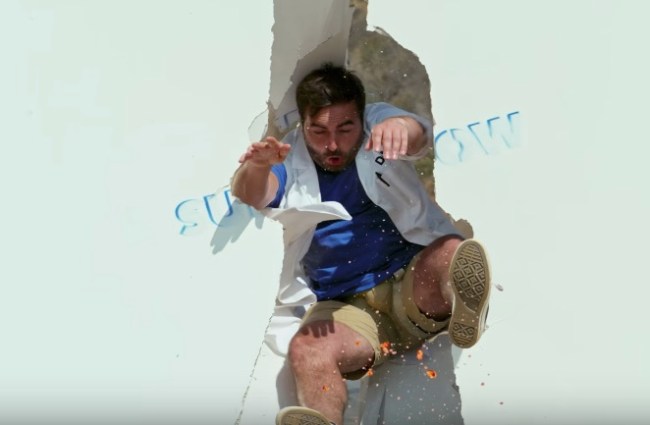 Everything looks cooler in high-def slow motion. The bros who run The Slow Mo Guys YouTube channel know this. A long time ago they realized that all they had to do was buy an awesome 4K camera and slow everything down while filming in high-definition and people like myself would tune in to watch them do cool stuff.

In their latest episode, The Slow Mo Guys have gotten ahold of a Jerk Vest and some stunt walls. The jerk vest is used by Hollywood stunt devils and stunt directions for action scenes when someone goes flying through a wall during a fight with a superhero or something of that nature. At full speed, it’s impossible to tell that they’re being pulled backward by the vest apparatus and it looks like the person is being thrown through the wall. So The Slow Mo Guys thought it would be awesome to film themselves crashing through walls wearing this vest and *spoiler alert* it is pretty dope:

I’ve never been one to complain about other people having cooler jobs than I do. My job’s pretty great. But every time I watch one of these videos from The Slow Mo Guys I can’t stop myself from thinking about how they’ve got some of the coolest jobs around. They basically get paid to run science experiments and stunts and film them for YouTube. And these stunts take a handful of hours at most. They’re also making a FORTUNE through YouTube. Truly living the dream.