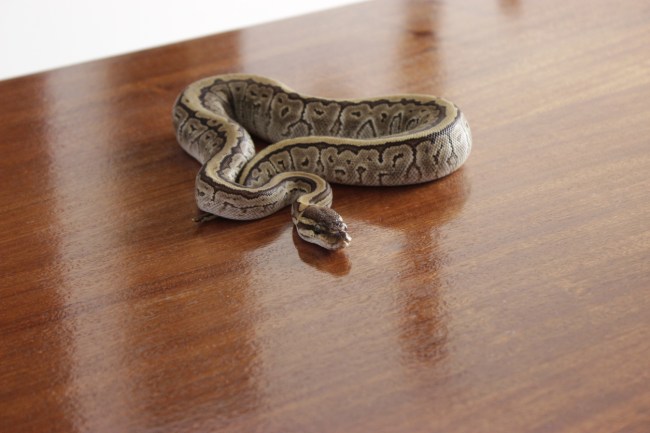 How to cook a frozen pizza: Step 1.) Preheat oven to 450°F. Step 2.) Remove pizza from the packaging. Step 3.) Place pizza on the middle rack. Step 4.) Make sure there are no snakes inside the oven. 5.) Bake for 15-20 minutes. 6.) Eat pizza. Unfortunately for one family, they forgot to do step four, and there was a snake cooking with their frozen pizza.

A family in North Carolina didn’t realize that they got a special topping on their pizza. The unique meat-lovers pizza featured a baked snake. An 18-inch snake slithered into the oven while they were cooking their pizza. Then when they took their pizza out of the oven, they discovered a crispy-baked snaked. Dems good eats!

Amber and Robert Helm from Wake Forest, North Carolina, discovered the cooked snake after they took their frozen pizza out of the oven. Motherf*cking snakes in the motherf*cking oven!

"We went out to eat. We did not eat the pizza."

This family found an 18-inch snake baking in their oven alongside their pizza. https://t.co/izBliFws1k pic.twitter.com/dq5Ci9AFT8

“The oven started smoking, and I told my boys ‘back up’ so I can make sure a fire or anything didn’t happen,” Amber Helm told WRAL. “I looked closely and was like, ‘Oh my God! That’s a friggin’ snake.’”

“The oven was dark, and the snake was likely dead by then from the preheat,” Amber said. The family had used the oven days before to cook a ham on Christmas Day, but there were no slithering creatures at that time.

“It got in via the holes at the bottom that allow for airflow,” Amber said. “We aren’t certain yet how it got into the house but assume through our crawl space.”

The Helm family just moved into the house last January and have two small children, a three-year-old and a one-year-old. Thankfully the critter was crispily cooked and wasn’t able to harm the kids. The Helms decided to forgo the snake pizza and were soon eating good in the neighborhood at Applebee’s.

“I was queasy, and it was creepy,” Robert said. “There’s nothing good about finding a smokey snake in your oven.”

“I immediately got them out of the house and took them to Applebee’s while my husband stayed home and got rid of the snake, and a started to air out the house and clean the oven,” Helm said.

A pest control company is coming to the home next week to make sure that there are no other snakes. Well, the oven saved this family from the trouble of having to burn down the entire house.