SNL: Here’s What Pete Davidson Looks Like As A Drag Queen 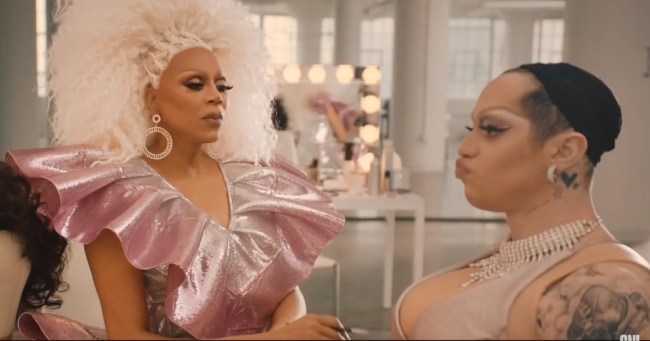 “There’s a queen inside of you. All she needs is a crown.” Those are the words of RuPaul, and on Saturday night, she put her words to work as she attempted to transform Pete Davidson into a drag queen.

This week’s SNL was hosted by none other than RuPaul, who saw the fabulous potential of Pete Davidson’s stoner character Chad. In the comedy skit, RuPaul was bored with being on yet another cover of a drag queen magazine. She started looking for the “future of drag.” It turns out, the future was right in front of RuPaul.

Chad, who was working on the magazine photoshoot, was swooped up by RuPaul to be a protege.

“There’s something dynamic about you,” RuPaul said to Chad. “Those eyes. That face. Those cheekbones. Have you ever done drag?” Then Chad responded, “No, just weed and pills.”

The RuPaul’s Drag Race host gave Pete his first lesson in drag: “The tuck — No bulge, no bump. The junk goes in the trunk!” Chad put his junk under the hood and not the trunk.

Chad was given fake breasts, but he couldn’t keep his hands off himself. To which RuPaul warned: “Leave the chicken cutlets alone child, you gonna pop your tuck.”

Chad didn’t do well with strutting and sashaying in high heels, he faceplanted straight into the craft services table in the SNL digital short.

“I can mold you into the next RuPaul, and if you want to be the best, you’ve got to be willing to work your padded ass off,” RuPaul said. Chad responded, “Nah.”

“Some horses were born to run wild,” RuPaul said of her failed drag queen pupil.

It took two hours to transform Pete Davidson into a drag queen.

Davidson and RuPaul also hooked up in the SNL sketch titled “Thirsty Cops,” where two police officers see Pete as a “snack.”