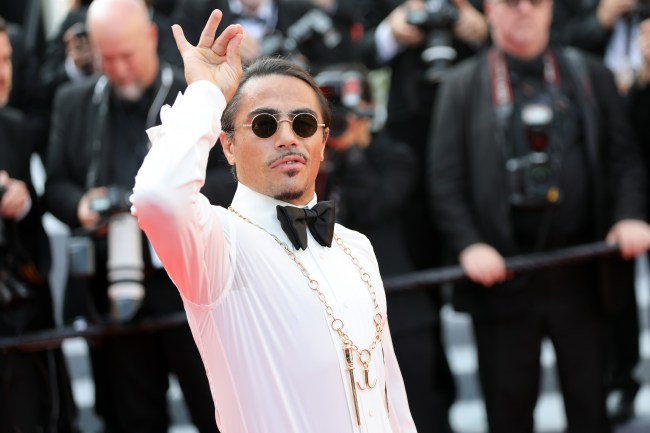 SNL ran a salt bae sketch this weekend that must have looked eerily familiar to comedians Ari Mannis and Alex Ansoleaga:

Ari applied to write for Saturday Night Live in 2020. In his packet, he included a salt bae sketch—portions of which can be seen in the contrasting clip he posted on his Instagram above. He didn’t get the job, but clearly, he left an impression. Because this past Saturday, less than a year later, they ran a sketch so similar to one written by Ari and Alex that you almost have to respect it how little they tried to disguise it.

When you apply for comedy TV writing jobs, you sign a release that usually looks like this:

“Left up to us to determine whether we have, in fact, used original materials submitted by you and to decide what compensation, if any, should be paid.”

In other words, go fuck yourself.

Now, realistically, shows need these releases because everyone is writing jokes about the same stuff—especially shows that gear their material towards current events. Thousands of writers submit for SNL every year. One can only imagine how many NFT sketches will be sent in during the next submission round. Last year, there was probably a bounty of Peloton sketches. Thus, shows need to protect themselves by reminding submitting writers that just because you sent in a Kamala Harris sketch, and then SNL MADE a Kamala Harris sketch, it doesn’t mean they took it from you.

And it certainly doesn’t mean they need to pay you.

It’s easy to imagine the writing staff at SNL coming up with a salt bae sketch, given SB’s recent resurgence from whatever beach he’s been dicing turtle steaks on in the Galapagos. And the obvious route to go is an oversexualized version of him. With that said, sometimes two sketches or bits look so similar that you can’t help but think… yeah, they took that. And watching these two salt bae sketches is a bit too close for comfort.

The legs in the air while salt bae sprinkles salt all over the ladies was the nail in the coffin for me. That’s the beat of the sketch that feels like an echo.

Either way, congrats on the unpaid writing gig Ari and Alex! If only you were still in college, you might be able to file it for class credits.