Snoop Dogg And 50 Cent Troll T.I. For Taking His Daughter To The Gynecologist To Check Her Virginity 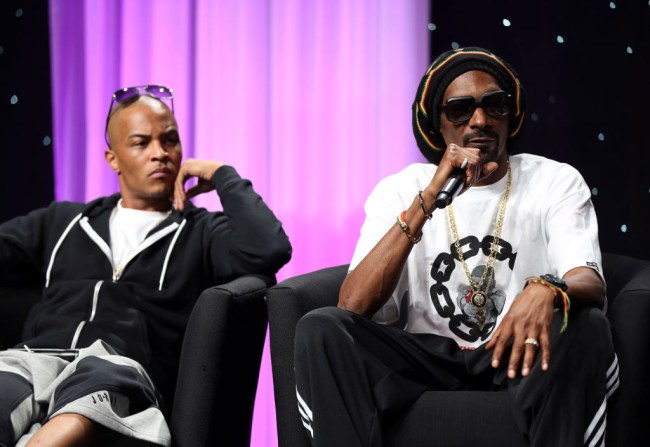 During an appearance on a podcast on November 5, T.I. made a few eyebrow-raising remarks about taking his daughter to gynecologist annually to make sure she is still a virgin. The Bring Em Out rapper received much backlash for his comments that some deemed as “sexist,” and now T.I. is getting trolled by fellow rappers Snoop Dogg and 50 Cent.

T.I. was on the Ladies Like Us podcast where he revealed a peculiar yearly practice of taking his daughter to the gynecologist for her annual checkup and to make sure that she still has her hymen.

T.I., real name is Clifford Joseph Harris, Jr., explained how he takes his daughter’s virginity very seriously. “We have yearly trips to the gynecologist to check her hymen,” he said.

“This is what we do. Right after the birthday, we celebrate,” T.I. said. “Usually, like the day after the party, she’s enjoying her gifts. I put a sticky note on the door: ‘Gyno. Tomorrow. 9:30.’”

The 39-year-old rapper stated that he would pressure his 18-year-old daughter Deyjah Harris into allowing the doctor to give her father her results from the test.

Snoop Dogg and 50 Cent have jumped on the bandwagon of people ridiculing T.I. for his possessive parenting style of his adult daughter. Snoop Dogg posted a “Woman Yelling at a Cat” meme that roasted T.I. for his fathering methods.

Then in the comments of the post, 50 Cent added laughing emojis with the caption: “Yeah man, what the fuck was T.I. talking about. LOL.”

Iggy Azalea also went after T.I. and tweeted out: “I really wish the women who interviewed him would have said something to him. He has serious control issues with women in all aspects of his life & needs therapy.”

The hosts of the Ladies Like Us podcast, Nazanin Mandi and Nadia Moham, also received backlash from people on the internet for making light of the situation that they call “misogynistic.” They have since issued an apology for not assailing Tip.

Deyjah responded to her dad’s comments by liking tweets that called her father’s behavior “possessive.”

T.I. unfollowed her dad on Instagram and Twitter and has stopped following her mother Tiny, and her older sister Zonnique on social media. Thanksgiving is going to be lit at the Harris household.