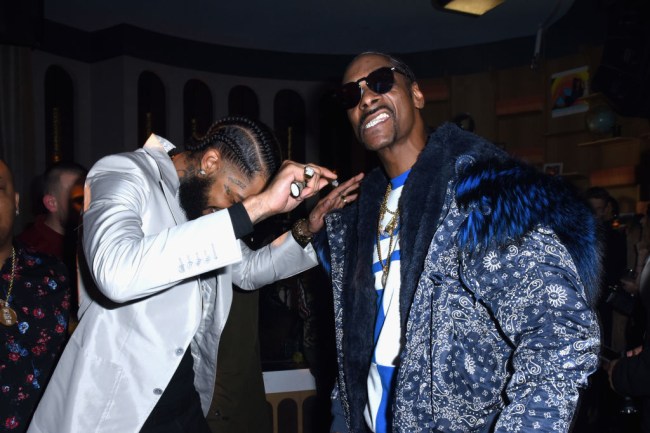 There have been a lot of comparisons between Nipsey Hussle and Tupac Shakur because they were both influential rappers who were gunned down in their prime. Now Snoop Dogg, who personally had close relationships with both iconic rappers, is now not explaining how Nipsey and Pac were similar and different and compared Neighborhood Nip to Jesus Christ.

Snoop Dogg made an appearance on The Breakfast Club on Wednesday morning and discussed a number of topics including his new album I Wanna Thank Me, Jay-Z’s new partnership with the NFL and Death Row Records. The Doggfather also talked about the similarities between Tupac and Nipsey Hussle.

“It really, really broke my heart. Like for real,” Snoop said of Nipsey Hussle’s premature death while talking about his new song One Blood, One Cuzz at the 20-minute mark. “What [Nipsey] stood for was stopping the gang violence. He was from 60 Crip but he loved gang members. He loved Bloods. He loved YG. And the bond he had with the ‘hood—different neighborhoods—was impeccable. He was like a street soldier.”

“What [Nipsey] stood for was stopping the gang violence,” Snoop continued. “He was from 60 Crip but he loved gang members. He loved Bloods. He loved YG. And the bond he had with the ‘hood—different neighborhoods—was impeccable. He was like a street soldier.”

“The spirit Nipsey had was the spirit Tupac had as far as being up close and personal with the people,” Snoop said at the 30-minute mark of the interview.

Snoop added, “I think Nipsey did what Tupac couldn’t do. I think the spirit of Tupac was Nipsey. He don’t rap like him, but he moved like him. The way he was lovable, but gangsta at the same time.”

Snoop Dogg’s praise of Nipsey Hussle went so far as to compare the rapper to Jesus Christ. “Look at the impact that he had, the same impact Jesus had,” Snoop proclaimed. “A lot of people didn’t know him, but they sure wanted to know about him once he passed away. Then once they found out about him, they understood what his legacy was about. Now, his legacy is living even bigger with him not being here. So that’s why I say, ‘I ain’t never seen Jesus, but I’ve been hearing about it.’”

“We gotta lot of faith in him and we know if you believe in him, this is gonna happen ’cause your grandparents and the Bible been giving you all this information,” Snoop Dogg explained. “It’s like, that’s what he is. When we gone, that’s what he gonna be like because you can’t touch him, you can’t see him, you only have images of him and his image look like Jesus. The bone structure, the eyes … I’m looking at him like, ‘Man, please.’ It is what it is.”

RELATED: Nipsey Hussle’s Alleged Murderer Shot Him Over Conversation About ‘Snitching’ And Kicked Him In The Head After Shooting Him 10 Times, Witnesses Say