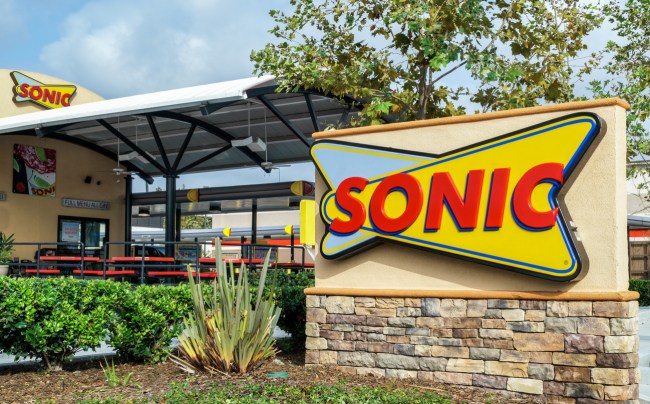 For the past fifteen years of my life, I’ve been bombarded with commercials featuring two improv comedians engaging in various shenanigans while singing the praises of the menu offerings at Sonic, and while I like to think I don’t easily fall victim to advertising, I’ll admit they’ve done a damn fine job making me want to make a pilgrimage to the drive-in.

Unfortunately, Sonic has remained my culinary white whale—a utopia that only exists in my mind; a place where the tater tots flow freely and roller-skating waiters serve you with a smile on their face.

I’ve lived in the Northeast my entire life, a region that’s as underserved with Sonics as a patron during a stress test on Bar Rescue but is still the target of the aforementioned advertisements for reasons I could never understand.

Thankfully, I recently got the answer to that eternal question and a chance to experience what I’ve been missing my entire life when I was invited to take a sneak peek at what the chain is preparing to unleash upon the world in the coming months.

This was it. This was the chance I’d been waiting for my entire life.

I made the trek to Long Island with an admittedly irrational amount of butterflies in my stomach as I prepared myself for what was in store before arriving at the promised land.

Sure, it was just a restaurant, but to paraphrase Mr. Bean in Love Actually: this was so much more than a restaurant.

I was greeted by Scott and Lori, who respectively serve as the culinary and marketing masterminds at Sonic. I tried to play it cool, but after being in the dark for an eternity, it didn’t take long for me to channel my inner Seinfeld and ask what’s the deal with those commercials.

The answer was surprisingly (and somewhat disappointingly) obvious: despite being largely concentrated in the Midwest, it’s simply cheaper for Sonic to advertise on a national scale.

However, Lori admitted the strategy helps to generate an insane amount of hype and all but guarantees people will come from far and wide to sample the wares when a new location opens (she said police are frequently needed for crowd control when a restaurant first opens its doors).

With my thirst for knowledge quenched, I settled in as wheeled waiters skated in with trays filled with a menagerie of new products ranging from ice cream sandwiches made with oversized Oreos and burgers sandwiched between King’s Hawaiian buns (a.k.a. the G.O.A.T. roll at any family gathering).

However, out of everything I got to sample that day, one product ruled supreme: the Reaper Spicy Margarita.

The drink is one of three cocktail-inspired slushes Sonic will be debuting in a couple of months—they’ll also be slinging up virgin strawberry daiquiris and piña coladas—but the margarita mocktail was far and away the standout and one of the most unique fast food creations I’ve ever tasted thanks to one not-so-secret ingredient: Carolina Reaper peppers.

A fast-food chain is the last place I’d expect to dish out a drink containing actual pieces of one of the planet’s spiciest peppers but Sonic decided to go all-in and I couldn’t be gladder that they did. It’s not overwhelmingly spicy but the slush hits you in the back of the throat with heat and lingers for a pleasant amount of time, and while I wouldn’t order a large, it kept me coming back for more.

While the drink itself doesn’t contain tequila, I have a feeling it would pair pretty well if you decided to take one home and add your blanco, anejo, or reposado of choice. With that said, if you’re in the mood for a “cocktail” that you can drink while operating a motor vehicle or heavy machinery, it’s hard to go wrong with this one.

You won’t be able to get your hands on the Reaper Spicy Margarita—or the other two slushes—until the beginning of July but I can attest it’s worth the wait.