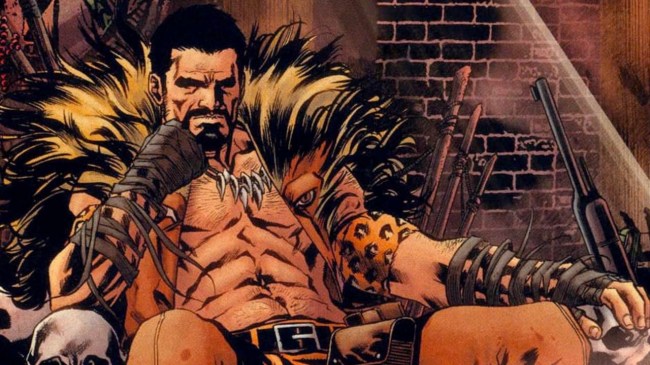 Back in August, it was announced that Triple Frontier filmmaker J.C. Chandor was tapped to direct a solo Kraven the Hunter movie. Arguably one of the most iconic Spider-Man villains of all time, the film would mark the live-action debut of the character, as he’s yet to appear in a Spider-Man film so far. The dream of a Kraven the Hunter movie is now closer to reality than ever, as The Wrap is reporting that Godzilla and Tenet star Aaron Taylor-Johnson has been cast in the titular, Spider-Man-hunting role.

Insiders say Taylor-Johnson came on studio execs radar for the part after dailies for his upcoming action pic Bullet Train started coming in where his scenes would blow away top brasss. Taylor-Johnson plays one of the main assassins in the pic and according to one source, his scenes with Brad Pitt were so impressive that the studio acted fast to get him on the phone with Chandor.

Taylor-Johnson’s Kraven is just the latest Spidey villain to join Sony’s Universe of Marvel Characters: later this year, Woody Harrelson’s Carange will join the fray in Venom: Let There Be Carnage, while Jared Leto’s Morbius will debut in his own solo film in early 2022. There are also reports of a Spider-Woman film in the works from Oliva Wilde.

At this time, Sony has scheduled Kraven the Hunter to hit theaters on January 13, 2023, which likely puts it on track to begin production in the Fall.