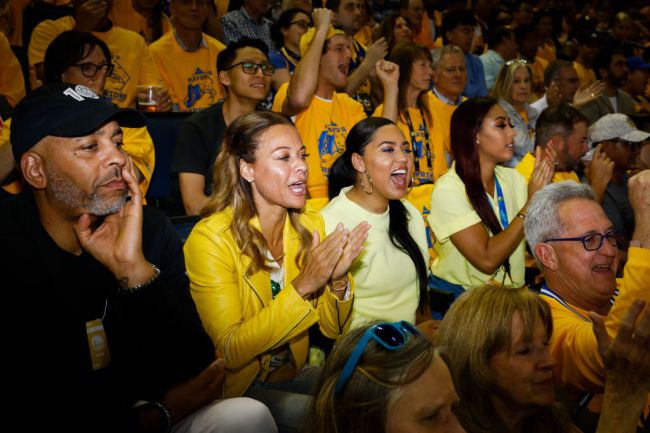 If you thought Dell and Sonya Curry were going to diminish their marital issues in divorce proceedings to avoid dropping unnecessary drama at the feet of Steph and Seth, I’m afraid they’ve failed you.

Within hours of news of their split after 33 years, Dell reportedly cast the first stone—claiming Sonya committed “acts of illicit sexual misconduct” prior to their separation, and then lying about it. Sonya, who initially wanted to keep their lurid details of their marriage out of the press, was forced to reveal Dell’s infidelity was “known to family and close friends … saying it was basically an open secret.”

In the most recent documents obtained by TMZ, Dell claims his wife cheated on his with former New England Patriots sixth-round pick Steven Johnson.

In the docs, Dell says Sonya “began her extramarital affair with Mr. Johnson during the marriage and prior to the date of separation, and she lied to [Dell] each time she cheated on him.”
Dell, in the docs, says Sonya is actually living with Johnson in Tennessee … and claims she should not be entitled to alimony because of it.

Sonya reportedly denied living with Johnson, and claimed she is currently living on her own because Dell won’t let her live at their home. Sonya did confirm that she is involved in a romantic relationship, but said it began months after her and Dell’s separation.

Johnson, 56, was a sixth round pick by the Pats in 1988, and played just two seasons in the NFL after tearing up his knee in a preseason game after signing with the Dallas Cowboys in 1990.

According The Virginia Pilot, the father of three currently serves as president and owner of Johnson Commercial Development, one of the largest commercial developers in the southeastern United States.

And according to his professional website, he seems to be a pretty charitable dude, serving on several boards, including Niswonger Children’s Hospital Foundation where he serves as Honorary Co-Chair.

In 2004, Steve donated a building for the construction of the Birthplace of Country Music Museum. Currently, Steve is a board member and generous supporter of the United Way of Bristol. In addition, Steve is still strongly connected to his Alma Mater, Virginia Tech. He is a member of the Ut Prosim Society, a select group of Virginia Tech’s most generous supporters and has contributed to the construction of a new practice field and the renovation of portions of the Merryman Athletic Facility.

In 2013, after donating a $1 million pledge toward construction of the Virginia Tech practice fields, his alma mater named the building after him.

While it’s still unclear how Johnson met Sonya, the man’s Instagram account, which he just made private, reveals that he rubs elbows with Darius Rucker, Kevin Hart, and other high-profile figures.