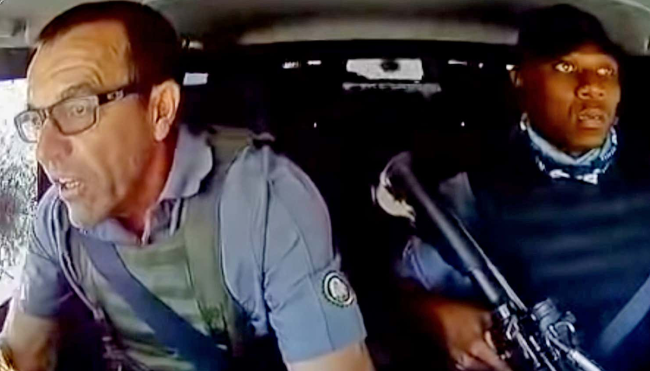 A few years ago, I was minding my own business on the highway when my drive was rudely interrupted by a huge piece of debris in the middle of the road and was subsequently treated to the massive adrenaline rush that comes with swerving across multiple lanes of traffic at 70 MPH at a moment’s notice.

That was my first and only taste of evasive driving, so I cannot imagine what must’ve been surging through the veins of an armored car driver who went full “Ryan Gosling in Drive” mode when a routine cash-in-transit job went awry courtesy of a group of armed robbers who riddled his truck with bullets in South Africa in April.

Videos of Leo Prinsloo remaining remarkably calm under fire went viral after the internet got a glimpse at the wild maneuvers he pulled out to prevent the gang from driving away with a single cent. The retired police officer also got a major assist from the beefed-up Toyota Landcruiser that kept him and his partner protected from the shots it was pelted with, and he recently visited the company responsible for the lifesaving security upgrades to reflect on the surreal scene.

I feel like I would’ve just blacked out in a similar situation, but Prinsloo is able to recall almost every single second of the incident during a fascinating breakdown of the robbery attempt that ended with the vehicle absorbing 13 bullets.

It’s sort of like listening to LeBron James vividly recapping the events of a game (although the shots Prinsloo is talking about are of a decidedly different type).