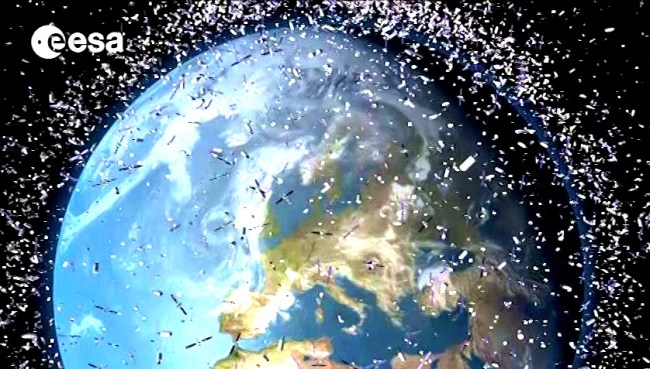 Bad news, folks. We might have to cancel our plans to colonize Mars or one of those swanky new planets we discovered because space is becoming too congested with all the debris and other junk we’ve launched and just left lying around up there.

According to the European Space Agency (ESA), there are over 750,000 pieces of space debris currently orbiting Earth.

In fact, there’s so much junk floating around in space that trying to keep it from slamming into and damaging things like the International Space Station has become a full-time job.

The ESA now has people working on a RemoveDEBRIS mission where a satellite goes around with a giant net, grabs the space trash, then shoots it towards Earth’s atmosphere where it burns it up. Seriously. They’re doing that.

One of the many issues created by the over 5,000 rockets that have been launched into space since 1942 and all the satellites, fuel tanks, boosters, and other cargo that have been left up there, is that once up there they can collide with one another spreading the debris all over the place.

Donald Kessler, former NASA Senior Scientist for Orbital Debris Research and the man behind the Kessler syndrome theory, told Digital Trends, “If we started next year and removed five objects per year for the next 100 years, that would stabilize the orbital environment.”

Just one problem, or well, one of the problems…

“These objects were not designed to be grabbed a hold of and many of them are spinning,” said Kessler. “Before you can grab the object, you have to stop the spinning. And some of these are as big as school buses.”

In the late 1970s, when research on space debris was just beginning, Kessler proposed a scary possibility: that one day, there could be so much junk in low earth orbit that collisions would cascade until it was difficult or impossible to launch satellites without them being struck by debris. We’d essentially become prisoners on our own planet, and we’d have nobody but ourselves to blame.

Kessler doesn’t think it’s likely that we will eventually become trapped on Earth, completely cut off from other planets, but he does worry that all that debris floating around the planet will impact our ability to study space.

“What will hurt the most is not losing access to other planets, it’s losing the Hubble telescope. It could eventually become just a piece of debris,” said Kessler. “It’s our scientific curiosity that’s at risk.”

Also, the more space debris there is, the higher the likelihood that that junk will crash into the satellites we do use up there and cause the disruption of things like television, GPS, weather-tracking services, and GOD FORBID, cell phone services.

Ralph Dinsley, founder and executive director of Northern Space and Security LTD, spoke with the Daily Express about the issue and said, “We could have a major space junk event that will mean that we can’t launch beyond low-Earth orbit and we trap ourselves on Earth. The simplest event is that it will slow down how we do space exploration. It has been ten years since the last satellite on satellite collision. The likelihood of it happening is very low but there is still that potential. But the catastrophic results could be huge.”

No kidding. Forget colonizing Mars. Can you imagine not having any cell phone service?! *shudder*