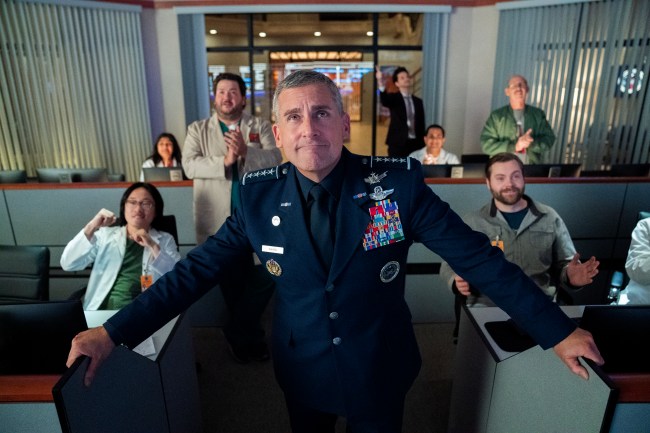 When news first broke that The Office creator Greg Daniels was set to once again team up with Steve Carell for a 30-minute comedy, the minds of television fans naturally fixated on the TV character that made the pair stars: Michael Scott.

The cartoonish center of The Office, Steve Carell’s performance as Michael Scott unquestionably ranks in the Top 10-or-so funniest TV characters ever and has only improved with time, as the now-revered dramatic actor’s ability to keep his composure while delivering his legitimately outrageous lines becomes more impressive as time passes.

The Office‘s preeminent feature — Carell — would also ultimately end up being their “downfall” (the show was and remains widely successful, this is meant more in the sense that everything has a fatal flaw), as the quality of the beloved NBC comedy dropped markedly once the Emmy and Oscar-nominated actor departed.

Conversely, Space Force seems to invert that model, as Carell — while still comfortably hilarious — is more of a traditional leading man character than the outright cartoon that was Michael Scott. Instead, the series’ supporting players — particularly a predictably excellent John Malkovich and the always-enjoyable Ben Schwartz — tend to do the heavy-lifting when it comes to the outright comedy. Malkovich and Schwartz are just two of the scene-grabbing supporters, as Lisa Kudrow, Jimmy O. Yang, Diana Silvers, and Tawny Newsome all shine. This isn’t to say that Carell isn’t prime Carell — he is — it’s just that his jokes come more through writing and character development than pure outlandishness.

The distribution of comedic duties is just one of the many differences between The Office and Space Force. Whereas The Office was designed to allow viewers to pop in and out whenever they pleased, Space Force possesses a more serialized nature that places more weight on the show’s plot. That plot-focused nature makes the series more mature, but not always more successful, as the largely character-development-driven scenes involving Newsome’s Angela Ali feel forced despite the innate charisma of the actress herself.

This is all to say that if you head into Space Force expecting a militarized sci-fi version of The Office, you’re setting yourself up for disappointment. The two series, frankly, couldn’t be more different, and it’s obvious that the alpha and omega of the creation — Daniels and Carell — are far more mature than they were the first time around. The humor of Space Force may not be as inherently campy as The Office but it’s equally as sharp. And perhaps best of all, despite the fact that the series is based on a controversially-real branch of the government, it avoids wading into overtly political territories (The President is never referred to by name, simply referred to as “POTUS”).

In a time where it seems as though every aspect of our society is politicized, Space Force, shockingly, perhaps provides the unexpected opportunity for us to laugh together at how truly and fundamentally preposterous our clearly broken government is. It’s smart, it’s funny, but most of all, it doesn’t seem to take sides except for the one we’re all on: everyday Americans wondering what the hell those in charge are actually doing with all the money, their time, and our future.

All 10 episodes of Space Force will debut on Netflix in the United States on Friday, May 29.