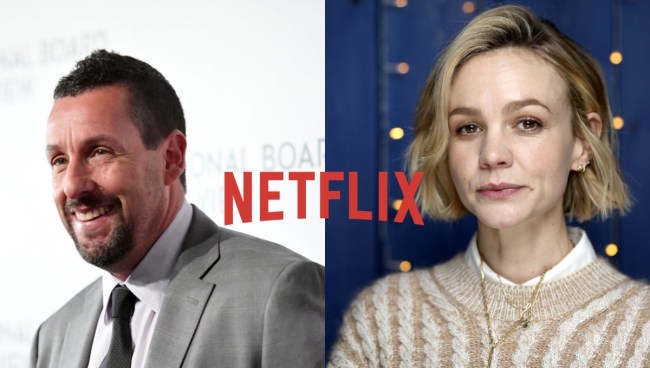 Of all the things about Hollywood I’m “very much here for”, Adam Sandler starring in legitimately good movies is one of them.

And look, that’s no knock to the Sandman and his modus operandi: the dude has carved out an absolutely brilliant niche, as he’s become a business unto himself. Can you even name all of the movies he’s been churning out over on Netflix other than the cinematic masterpiece that is Hubie Halloween? Of course not! But you know he’s been churning them out all the same, and he’s been getting paid staggering amounts of money to do so. Plus, in classic Sandler fashion, all of these movies are probably filmed somewhere tropical and definitely feature most of his friends in the cast. His next Netflix film, though, sounds like it’ll be more Uncut Gems than Hubie Halloween — not in terms of tone, but in terms of prestige.

According to reports, Sandler is set to co-star with two-time Academy Award nominee (and possible soon-to-be winner) Carey Mulligan in Netflix’s Spaceman, which will be helmed by Emmy-winning Chernobyl director Johan Renck. An exciting group of talent, no? The plot is even more intriguing.

The story, based on Jaroslav Kalfar’s novel, follows an astronaut (Sandler) sent to the edge of the galaxy to collect mysterious ancient dust. He soon finds his earthly life falling to pieces, and he turns to the only voice who can help him try to put it back together. It just so happens to belong to a creature from the beginning of time lurking in the shadows of his ship. Mulligan will play the wife of Sandler’s astronaut protagonist. [via Deadline]

As I’ve said ad nauseam on this website, I think that the space genre in pound-for-pound the most consistently strong film genre there is. Even the worst space movies — just watched Event Horizon for the first time on Sunday, deeply awful but also still extremely watchable — are entertaining, let alone ones that star Sandler and Mulligan (who I’m genuinely hoping wins the Oscar for Promising Young Woman).