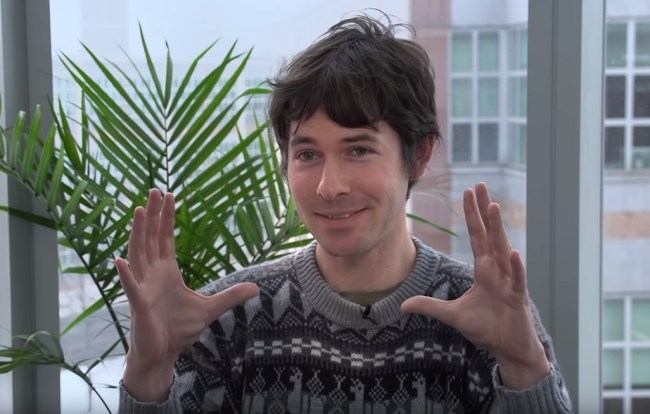 Hey, did you crap your pants yet today? Do you want to? Well if you do, you’re in luck because we have just the pantaloon-soiling video. A huge, and I mean HUGE, spider was captured on video dragging an opossum. The title of the video should have simply been named “NOPE.”

The gentleman you see in the photo above is University of Michigan PhD Candidate Mike Grundler. He is showing his hands like he is wide open in a flag football game, but in actuality, he is displaying on how enormous the spider he witnessed in the Amazon was. He said the spider was the size of a dinner plate. And Grundler is not just BSing everyone because there is video evidence of the ginormous spider and it is pure, unadulterated nightmare fuel.

On Thursday, researchers from the University of Michigan shared a video of an enormous tarantula dragging an opossum before eventually eating it. The video is believed to be the first of its kind showing a spider preying on an opossum according to the American Museum of Natural History. Mmmmm… opossum, its what’s for dinner.

The video supported the work of the reseachers in their paper that appeared in “Amphibian & Reptile Conservation.”

In November of 2016, Grundler and fellow Michigan “heard some scrabbling in the leaf litter” during a night survey in the Amazon rainforest. They then observed a giant tarantula attack a mouse opossum that was the size of a softball and struck the mammal in its neck. After a five-minute fight to the death, the spider had killed the opossum and was dragging the animal away. What dishonor he brought to his opossum family.

But the frightening encounters didn’t stop there. The paper also includes observations from 2008 to 2017, that discuss large spiders attacking frogs and a lizard. Then there was a case where a large centipede ate a live snake, and another centipede ate a dead coral snake it decapitated.

“Coral snakes are very dangerous and can kill humans,” study co-author Joanna Larson, a University of Michigan doctoral candidate, said in a statement. “To see one taken down by an arthropod was very surprising. Those centipedes are terrifying animals, actually.”

“This is an underappreciated source of mortality among vertebrates,” Daniel Rabosky, an evolutionary biologist at the University of Michigan who leads a team of researchers to the Amazon rainforest about once or twice a year, said in a statement. “A surprising amount of death of small vertebrates in the Amazon is likely due to arthropods such as big spiders and centipedes.”

The footage reportedly came from Peru. *crosses off Peru from my travel list*