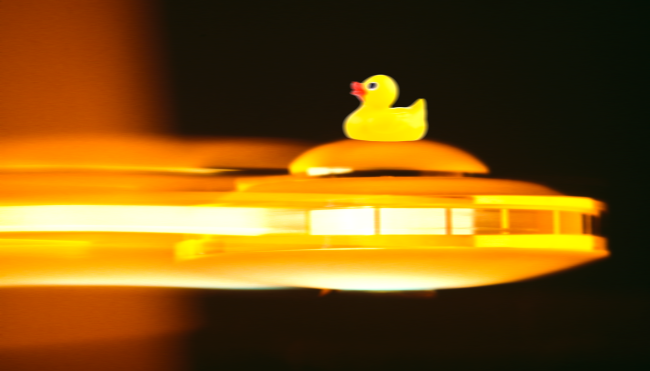 A hour long video purportedly filmed by a Department of Homeland Security (DHS) RC-26 surveillance aircraft showing what appears to be a rubber duck shaped UFO has been leaked online and it’s causing quite a stir in the UFO hunter community.

According to the description of the video, posted to the YouTube channel NY UAP DISCUSSION last week, it is “the very FIRST legitimate footage of a genuine UAP craft tracked for over 40 minutes by the department of Homeland Security using FLIR optics system in black hot mode.”

“The footage was captured by an RC-26 reconnaissance plane looking for drug smugglers somewhere over Tuscon Arizona,” the description continues. “The object was spotted 20 minutes into the footage and was tracked for a full 40 minutes until the footage ended.

“The object in question has been verified as anomalous by the organization which analyzed the footage, however, that analysis will be released later on in the year as it is still going through its peer review stage.

“The object in question is traveling anywhere between 90-200 mph as it flies over the desert surface and is also changing direction as it flies. It is estimated to be about 5 or 6 ft long and looks to have a second smaller appendage that flies with it but it is still uncertain if the smaller orb like object is actually a part of the main one or separate from the main. Also there is no clear indication that there is anything between both parts to show they are attached.

“The object is emitting zero heat yet accelerates and decelerates throughout the footage. The change in speed and direction is evident by the terrain as it changes while the object is being tracked and also the speed can be seen in the upper right hand side of the FLIR info. The object can also be seen rotating as it flies.”

The rubber duck shaped UFO footage was supposedly recorded around 9 p.m. on November 23, 2019.

Related: Resurfaced Letter Written By Roswell Witness Details The Craft And ‘Humanoids’ At The Site

“When I first saw the footage I knew immediately I had something of value. I knew the object wasn’t any kind of conventional drone and was a genuine ‘unknown’,” Andy from NY UAP Discussion told The Sun Online.

“The Department of Homeoand Security’s job is to observe with a trained eye, so when they see something like this and can’t identify it, it’s a big deal.”

Luis Elizondo, the former head of the Pentagon UFO program, confirmed in a livestream that the video is legitimate footage from the Department of Homeland Security. However, he does not know what the object in the video is, speculating that it might just be a cluster of balloons.

“However, that it is only my initial perspective and that is why we are developing good AI – to be 100% sure in cases like this,” Elizondo told The Sun Online.

Take a look at the footage of this rubber duck shaped UFO for yourself and see what you think.