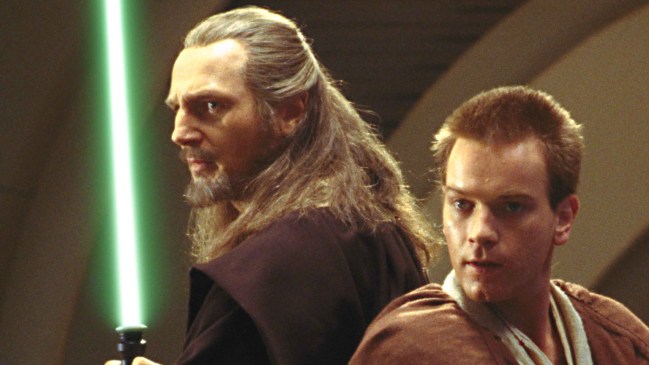 Over the weekend, I’d finally gotten around to watching Solo for the first time (big “meh” energy), which was the last live-action Star Wars film that I hadn’t seen. Upon wrapping the flick up, I posted my rankings of all of the Star Wars movies up on Twitter and it stirred up quite the debate.

Looking at the list now, one thing is clear and has been for the last two decades: the prequel trilogy was a mess. And that’s a shame because no only were they the last Star Wars films to be made without Disney’s meddling, but the last to be directed by the man who created the beloved universe, George Lucas.

Granted, while Revenge of the Sith was decent, the first two entries in the prequel franchises are an utter snoozefest. That particularly bums me out when it comes to The Phantom Menace, as the film not only carried almost unprecedented hype, but it was the only one to star an in-his-prime Liam Neeson as legendary Jedi Qui-Gon Jinn.

While Qui-Gon only appeared in one Star Wars film, he was still one of the most influential characters to ever appear in the franchise, as a recent hint from a new Star Wars book seems to indicate he was the only Jedi with the ability to stop Palpatine’s wicked scheme.

E.K. Johnston’s new book Queen’s Peril has just supported that assertion. The bulk of the story is set immediately prior to The Phantom Menace, although it then retells the film from the perspective of Padmé and her handmaidens. There are a number of interludes, however, and one shows Qui-Gon Jinn and his apprentice poring over the taxation bills being brought before the Republic Senate. These were orchestrated by Darth Sidious in order to engineer the Trade Federation’s invasion of Naboo and his ascension to the position of Chancellor. It seems Qui-Gon sensed there was something odd about this legislation, and he and Obi-Wan were looking through every detail in order to figure it out. No doubt that explains why Qui-Gon was the Jedi sent to Naboo when the Trade Federation invaded; he was already familiar with the pertinent issues.

It’s becoming clear Qui-Gon Jinn was a unique Jedi. He was the only member of the Old Jedi Order sensitive enough to the living Force to understand what was coming, and he knew enough to be watching political affairs with real concern. It’s unclear whether Palpatine truly understood the scale of Qui-Gon’s threat, or whether it was just his good fortune that Darth Maul killed Qui-Gon before being cut down by Obi-Wan Kenobi. [via ScreenRant]

This revelation tracks with recent comments from The Clone Wars and The Mandalorian director Dave Filoni, who says that the beloved lightsaber between Qui-Gon and Darth Maul truly was a “Duel of the Fates” (which is the name of the iconic Episode 1 score), as he argues that had Qui-Gon won that duel, he would have been able to save the soul of Anakin Skywalker.

With Disney seeming to pivot Star Wars towards the MCU model of world-building and shared narrative connectivity, a Qui Gon Jinn series could certainly be a possibility one day.