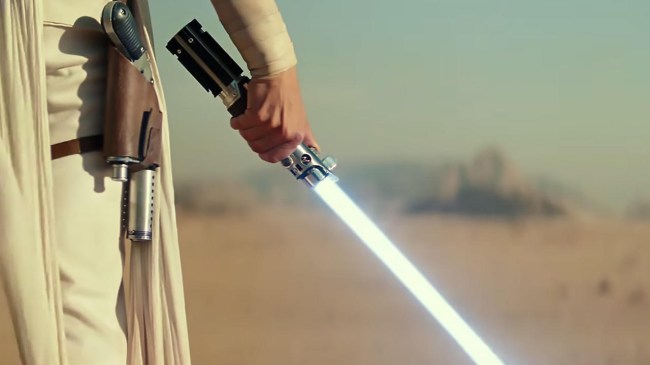 We’re still 211 days, 14 hours and 11 minutes until Star Wars: The Rise of Skywalker roars into theaters, but the hype machine must feed the beast to keep everyone amped up for the final Star Wars movie in the latest trilogy.

Legendary photographer Annie Leibovitz was on the set of Episode IX and snapped some beautiful photos of the cast and crew. The stunning photos also give us some hints for Star Wars fanatics to examine and re-examine to find hidden clues as to what will happen in the ninth Star Wars chapter. There is also some very interesting behind-the-scenes photos to check out.

You of course get Mark Hamill as Luke Skywalker, Daisy Ridley as Rey, John Boyega as Finn, Adam Driver as Kylo Ren, Oscar Isaac as Poe Dameron, Lupita Nyong’o as Maz Kanata, Billy Dee Williams is back as Lando Calrissian, and the late Carrie Fisher as Princess Leia.

For #TheRiseofSkywalker, Billie Lourd asked to share scenes with her late mother, Carrie Fisher. There will be an on-screen reunion. https://t.co/WQkbUrHu2W pic.twitter.com/9MbbJDxM0i

But you’ll also get Keri Russell (The Americans and Mission Impossible III) as Zorii Bliss, who is the character in the maroon and gold with the large helmet. Richard E. Grant (Hudson Hawk and Downtown Abbey) as Allegiant General Pryde.

You’ll also get more of the mysterious Knights of Ren. Let’s hope they stick around for more than five minutes.

Sources close to #StarWars: The Rise of Skywalker reveal the film will finally bring to a climax the millennia-long conflict between the Jedi Order and the Sith https://t.co/ER4XSJmZ8k

Here’s what we can tell you about #TheRiseofSkywalker: when the film picks up—about a year after the end of The Last Jedi—Rey, Finn, and Poe are all finally in the same place for the first time since The Force Awakens https://t.co/cbjHB1IDSd pic.twitter.com/XWqLCCbsrK

And what, exactly, is going on with with Kylo and Rey in #StarWars and #TheRiseOfSkywalker? Details here. https://t.co/1QTsOGpSvL

You can enjoy of Annie Leibovitz’s photos from our #StarWars cover story here https://t.co/IeiOgX4lhk pic.twitter.com/ugBR4nEEwH