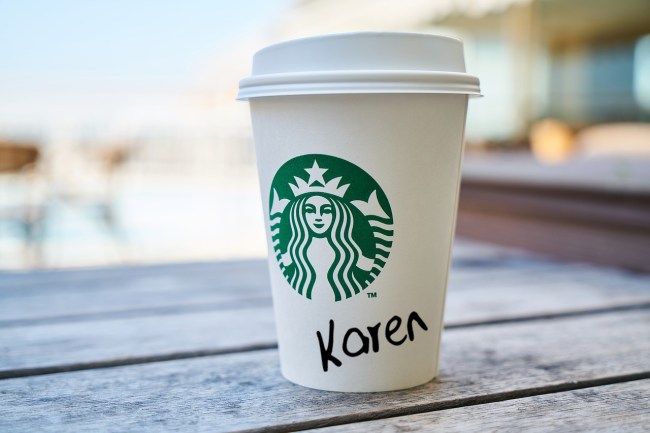 There’s a good chance your current morning routine looks slightly different than it did a year ago. In my case, it now involves waking up, grabbing some coffee, maybe eating breakfast, checking the news, and watching another maskless jackass go viral before finally beginning my day.

It seriously feels like I get out of bed every single morning only to discover yet another person lost their shit at a Walmart because they’re convinced being asked to wear a mask during a pandemic is a form of oppression. It was bad enough when people got triggered by a mere suggestion so I can’t even imagine what’s going to happen now that Walmart is changing its policy to require all customers to wear them in its stores.

I can understand if these are all kind of blending together but you may remember an incident involving a truly delightful woman named Amber Lynn Gilles that transpired at a Starbucks in San Diego last month. After a barista named Lenin Gutierrez refused to serve her because she refused to wear a mask, she posted a photo of him on Facebook with a caption about the grave injustice she was forced to endure.

Gilles may have been searching for some sympathy in the now-deleted post but it ended up backfiring, as a GoFundMe allowing people to “tip” Gutierrez for putting up with her shit raised over $100,000.

Now, Gilles has lived up to her reputation as the reasonable and rational woman we know her to be, as The New York Post reports she’s exploring the possibility of filing a lawsuit against the barista to collect half of the funds that were sent his way based on what she said in an interview with a local television station.

That wasn’t the only thing she shared, as she also managed to procure proof that she should be exempt from wearing a mask in the form of two medical documents. One of them concerned an ovarian cyst that was discovered during an exam in 2015 while the other was a note from a chiropractor who claimed she has “underlying breath conditions” and invited anyone with questions to reach out to them.

After the interview, the station did exactly that. The chiropractor declined to answer their questions.

Let’s give Amber the benefit of the doubt and assume she really does have “underlying breath conditions” that somehow stem from an issue with her reproductive system and were diagnosed by a back specialist. If that was the case, wouldn’t you want to wear a mask MORE so you don’t get the RESPIRATORY ILLNESS that’s going around????

Just go through the drive-thru if it’s really that big of a deal to you. There are ways to compromise and avoid putting other people at risk. Sadly, they usually involve having to deal with incredibly minor inconveniences so I can see why people don’t bother.