When Does The Statute Of Limitations Run Out On Dating Your Buddy’s Ex? 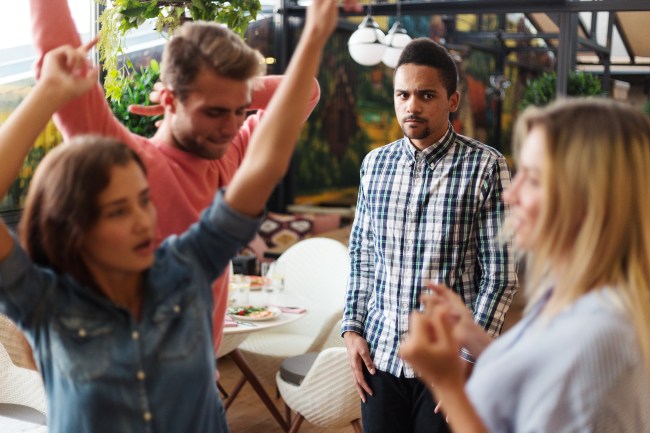 Good Friday, neighbor. Here’s a can of worms. I happen to have a can opener. Shall we?

Once upon a time, young men referenced a fabled, unwritten text to solve all their romantic disputes. We called it “guy code,” and it meant something. Or at least, we thought it did.

Except… it didn’t. It wasn’t real. It was the dumbest thing ever, because everyone broke it. In fact, the only time you ever heard about “guy code” was when losers would reference it because someone had broken it. “That’s a violation of guy code!” and “Bro, not cool. You broke guy code.”

No one ever preemptively reminded you of guy code. No one ever said, “just in case anyone was thinking of breaking guy code tonight, let’s all remember that we live in a society held together by the glue of guy code, and we must honor our commitment.” It only came up after the fact, as a guilt trip.

It meant as little as that drivers license rule where you’re not supposed to drive with your friends in the car for the first six months of having your license. Or the law prohibiting drinking before your 21st birthday.

At some point, you grow up and realize that “guy code” is about as baseless as the unwritten rules of baseball. Don’t flip your bat after a homerun? Huh. Seems like… baseball players flip their bats. All the time. And we only ever hear about these unwritten rules when someone breaks them. Which is often. And once they’re broken, the offender says “if you don’t want me flipping my bat, don’t throw me a pitch I can hammer into the upper deck.” Maybe he gets a fastball at his head the next game. Maybe the benches clear. But once the dust settles, bats will still be flipped. On and on it goes.

One of the founding PRINCIPLES of guy code was the “don’t hook up with your buddy’s ex” rule. If guy code had its own bill of rights, this would be its first amendment—the most referenced, but also the most violated. Rule #1: A man shall never sleep with his best friend’s girlfriend, ex-girlfriend, or mother.

Yes, guy code is an outdated, fake rulebook that bros point to to make other bros feel bad. But that doesn’t mean it doesn’t have its merits. Obviously, you shouldn’t hook up with a close friend’s girlfriend or mother. That’s not “guy code”; that’s human decency. Basically, don’t be a terrorist. We don’t really need a codified law for that. Normal people understand not to behave that way. And if your friend does? Well, you make terrible friendship choices.

Yet when it comes to the ex-girlfriend limitations, it’s not always so simple. Many factors are at play, and the cases are never black and white. Is every woman that every friend of mine has dated off-limits for the rest of our lives? Surely not. Women are not cattle. They are not branded such that should they wander through a broken link of fencing onto your 1,000 acre ranch, we can still determine that they belong to my ranch, i.e. Yellowstone.

Thus, how much time must elapse before your friend’s ex-girlfriend is eligible for your advances? Must you ask his permission before you ask her out? In my opinion, the answers to these questions come down to a few factors:

With all that considered, there’s also a short answer: can you handle the blowback? Ultimately, if she’s a consenting adult and you’re a consenting adult, you can do whatever you want. You may lose a friend, or even a few if the group turns against you, but only you can decide if it’s worth it.

We discussed this issue at length on our podcast, Oops. My cohost Giulio had a more nuanced take. Essentially, if your buddy is on to his SECOND girlfriend after the ex, it’s all fair game.

I’ve cued it up to the relevant discussion:

Here’s the full episode for those interested. Give it a shot, it’s diverting.

In sum: take your guy code and stuff it. Do whatever you want, if you can handle the heat. And women aren’t cattle.

Have a good weekend,