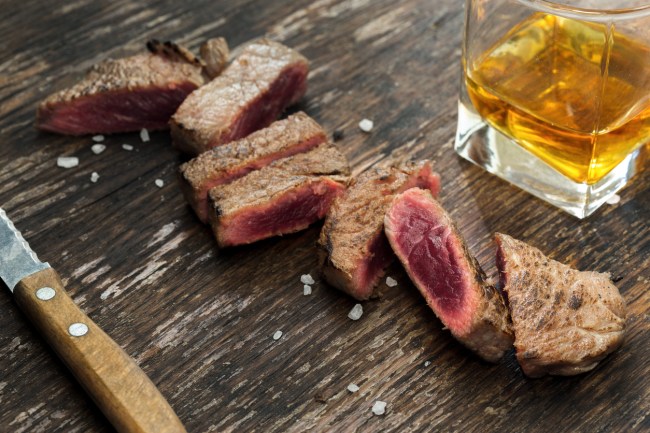 Over the years, people have committed a number of unforgivable culinary crimes capable of making even the most cast-iron-stomached person vomit in their mouth a little bit but there’s one recent trend that’s disturbed me more than any other: weird ice creams.

Last year, a gelato joint helped kick things off by making a ketchup-flavored product and things only got weirder from there, as it was only a matter of time until someone whipped up ice cream made with chicken nuggets and decided to sell a gag-inducing “treat” made with mayo.

Much like the scientist in Jurassic Park, the people responsible for these monstrosities were so preoccupied with whether or not they could that they didn’t stop to think if they should. Sure, these experiments may not have birth gender-bending dinosaurs but I think I’d rather be torn apart by velociraptors before putting mayo ice cream into my mouth.

Now, a new competitor has entered the arena thanks to Longhorn Steakhouse, which recently announced its plan to unleash steak ice cream onto the world.

The ice cream in question—which will be rolling out on July 1st in select cities—is flavored with the chain’s steak seasoning and features bits of actual meat in addition to a bourbon caramel sauce (the last of which has my full attention).

I’m a sucker for a sweet and savory dish when it’s executed correctly and doubt Longhorn would have decided it would be a good idea to sell this if it wasn’t at least a little bit palatable but I have to say I’m still a bit skeptical.

With that said, there’s no way it can be any worse than Whopper ice cream so at least it has that going for it.