Stephen A. Smith Reigns Vengeance, Goes On A Knicks Rant So Unhinged It Can Only Be Described As Biblical 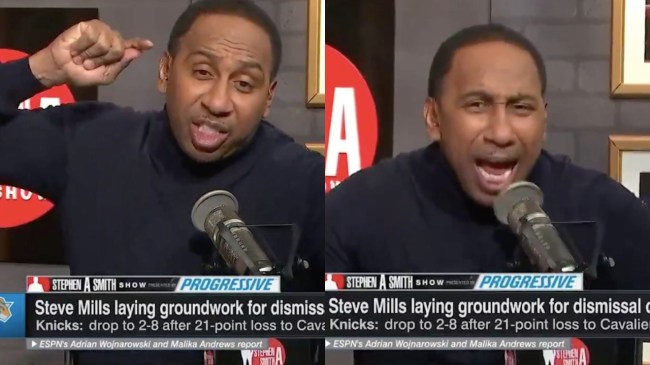 Let’s just make something clear in case we have any overzealous religious folk in the room who are ready to stick a crucifix up my keester for comparing Stephen A. Smith to the Bible:

Now, onto the man, the myth, the legend, the Stephen A. Smith.

Whether you hate the guy, are a casual fan, or tune into ESPN’s First Take every day, you likely know that Stephen A. is a proud born and bred New Yorker (except for the fact that he roots for the Pittsburgh Steelers, but that’s neither here nor there).

You also know that of all the many sports that Stephen A. pontificates about, it’s basketball that lies closest to his heart, as it’s not only his area of expertise but he actually played college basketball while at Winston Salem State.

So, what do you have when you’ve got a passionate middle-aged basketball fan that grew up in New York City? That’s right, you get a Knicks fan, and right now — and by “now” we mean, you know, the last 20 years or so — is not a pleasant time to be a Knicks fan.

Following an embarrassing 21-point loss to the hapless Cleveland Cavaliers on Sunday night, team president Steve Mills and general manager Scott Perry took to the podium to give an impromptu press conference in an effort to give fans some reassurances.

Needless to say, Stephen A. did not pick up what the bumbling Knickerbocker pair was putting down, as he went on a rant so unhinged on Monday that it can only be described as being of biblical proportions.

If there was ever a time where I wish I WASN'T restricted by FCC airwaves, it would be RIGHT NOW, DAMNIT! pic.twitter.com/ONWejT3zST