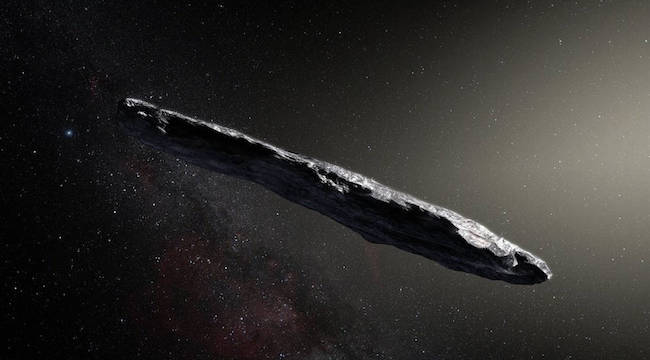 A few months ago, NASA reported the presence of an interstellar object that was the first thing to ever enter our solar system from another part of the galaxy. Last month, they revealed it was a giant asteroid that resembled one of the ships from Independence Day or a gigantic bowel movement from God depending on the angle you viewed it from.

The asteroid was dubbed Oumuamua, which means “a messenger from afar arriving first” in Hawaiian, and astronomers have been closely tracking its trajectory over the past few weeks as it speeds through space at 200,000 MPH. Now, the Daily Express reports noted Smart Person Stephen Hawking is leading a team of scientists who are looking into whether or not the asteroid is actually an alien probe that’s been sent into our corner of the universe with the intention of eventually launching an invasion that will kill us all.

Avi Loeb— a theoretical physicist at Harvard who has previously published research concerning the possible existence of extraterrestrial life— is one of the more vocal proponents of the alien theory.

“Perhaps the aliens have a mothership that travels fast and releases baby spacecrafts that freely fall into planetary system [sic] on a reconnaissance mission… The more I study this object, the more unusual it appears, making me wonder whether it might be an artificially made probe which was sent by an alien civilisation.”

Scientists are using a telescope in Virginia to monitor the presence of repeating electromagnetic patterns that would suggest the asteroid is actually a ship. In 1977, a satellite in Ohio detected a remarkably consistent transmission that is currently one of the most-cited incidents concerning the possible existence of alien life.

Congratulations to all of the rich people who have already reserved a spot in an underground bunker somewhere in the Midwest.