Is This An Asteroid Or One Of The Ships From ‘Independence Day’ Coming To Destroy Us All? 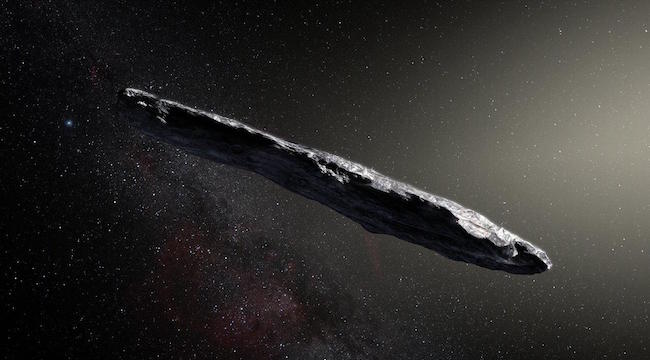 Last month, NASA announced it had observed the first ever interstellar object to pass through our solar system, which they eventually decided to dub A/2017 U1 (because astronomers are apparently more left-brained than any other group of people on the planet). At the time, they were unsure if the object was a comet or an asteroid, but after further research, they confirmed it was the latter.

Researchers recently released a rendering of what has now been dubbed Oumuamua— a Hawaiian word meaning “a messenger from afar arriving first” (because the Hawaiians apparently have a word for fucking everything). NASA seems incredibly excited about the new discovery, but as someone who’s seen Independence Day, I’m slightly less thrilled about our latest visitor.

If these scientists are to be believed, the asteroid is simply a visitor from another part of the Milky Way passing through our solar system at over 85,000 miles per hour. While the alternate angles in this video seem to suggest the asteroid is just a giant piece of space poop, I wouldn’t put it past the government to pull the wool over the eyes of the general public as they scramble to prepare for the possibility of the arrival of extraterrestrial life from another part of the universe.

NASA claimsOumuamua is on track to exit the solar system by 2019, but as far as I’m concerned, the aliens could just be lulling us into a false sense of security before they commence their attack on Earth.

Because I will never pass up an opportunity to post the greatest speech ever given by a president— either real or fictional— in the history of our country, here’s Bill Pullam to get you amped up to resist the potentially imminent invasion.

We will not go quietly into the night.