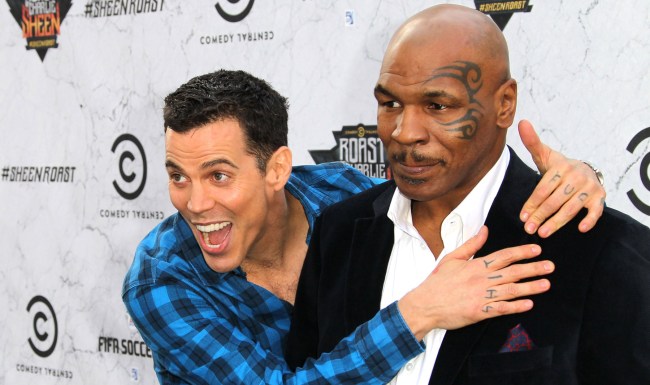 The legendary Steve-O was a guest on the most recent episode of In Depth With Graham Bensinger and as one might expect he had a LOT of good stories to tell.

During his appearance, Steve-O discussed a WIDE variety of topics including tales from the sets of Jackass and Wildboyz, becoming a stand-up comedian, his battles with drug and alcohol addictions – including listing all of the drugs he’s done in his life, his struggles with sex addiction, the closest he’s come to dying, and gave a wild tour of his Hollywood Hills home.

However, there is one story Steve-O told that probably outshines all of the others which involves crashing a house party in Hollywood, boxing legend Mike Tyson answering the door, the two of them locking themselves in a bathroom for hours, and then snorting and smoking up the MASSIVE amount of cocaine Steve-O had on him at the time.

“That night we were at a nightclub first and then everybody was going to this after-party and I kind of found out where it was and invited myself along and, you know, like showed up and banged on the door and Mike Tyson opened it. And I was like,’Hi,’ like, is it cool if I come in?” Steve-O recounted.

“And he’s like, ‘You got any coke?’ and I was like, ‘Yeah, I have A LOT. I remember having like half an 8-ball in in one pocket and like, an untouched 8-ball in the other pocket. Which was more than I would usually have,” he continued.

“And so yeah we locked ourselves in this bathroom, just me and Mike Tyson… the year was, I believe, 2005 and we went through ALL of it.”

Bensinger then wondered exactly what they talked about while locked away doing coke in a bathroom for hours.

“We, like, we were in that bathroom for hours, like hours and hours and before we parted ways he said, ‘You know, Steve, everybody’s got you wrong. You’re a really smart guy,” Steve-O recalled. “And then I just thought, like wow, Mike Tyson just told me I’m smart.”

Then they segued into talking about the time Steve-O and Mike Tyson somehow ended up locked up together in a psych ward. Amazing.

Next, Steve-O lists all the drugs he’s done throughout his life and talks about snorting HIV positive blood.

A discussion about his sex addiction…

And a tour of his home that includes detonating a smoke bomb in his editing room and Steve-O letting Bensinger blow a fireball off of his head.

What a life this guy’s led.