In A Move Sure To Inspire Confidence, Steven Seagal Is Now Representing A Cryptocurrency Group 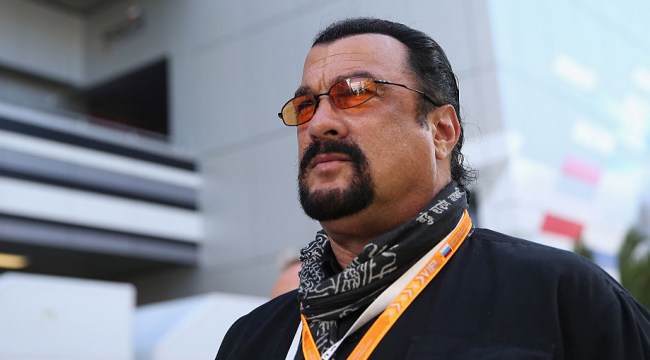 If you ever had any doubts about investing in cryptocurrency you can put those fears away now that action star Steven Seagal is throwing his support behind the virtual currency craze. This is the sign we have all been waiting for, people.

Yes, I know the whole cryptocurrency thing is very confusing. And yes, the mining of it is causing all sorts of hacks and security breaches. And yes, I know that people like Warren Buffet, the original “Wolf of Wall Street” Jordan Belfort, and the founder of Bitcoin.com have all said it is destined to fail. But, guys, Steven Seagal!

Luckily, I follow this legend of cinema and VOD on Twitter (Long live Team Seagal!) or I would not be aware of this golden financial opportunity.

You know that is important news since it is the first tweet the zen master has posted since April 13 of 2017.

The link Seagal shares leads to an announcement about him becoming the new brand ambassador for “leading cryptocurrency organization” Bitcoiin2Gen. IT HAS AN EXTRA “I” IN ITS NAME!

As a Buddhist, Zen teacher, and healer, Steven lives by the principles that the development of the physical self is essential to protect the spiritual man. He believes that what he does in his life is about leading people into contemplation to wake them up and enlighten them in some manner. These are precisely the objectives of the Bitcoiin2Gen to empower the community by providing a decentralized P2P payment system with its own wallet, mining ecosystem and robust blockchain platform without the need of any third party.

Zen Master, Steven mentioned an old Chinese saying “Flow with whatever may happen and let your mind be free. Stay centered by accepting whatever you are doing. This is the ultimate”. by Chuang Tsu.

For Bitcoiin2Gen, the choice of Zen Master, Steven Seagal is obvious as brand ambassador, this extends our long-term commitment towards the community.

This is so the best not-a-scam financial opportunity based in Hong Kong and presented in broken English that I have seen all week!

As if we needed more reason to invest in Bitcoiin2Gen, the press release gives it to us, in spades.

Steven Seagal is a man of diverse character whose spiritual beliefs and humanity are woven into every aspect of his life. Most of us know Steven for his roles as an action hero, Call it an obsession or a calling but Steven mastered Martial Arts at an early age, becoming a 7th-degree black belt and Aikido master. His films include box office successes such as Hard to Kill, Marked for Death, Out for Justice, Above the Law, Under Siege, Executive Decision, The Glimmer Man, and Exit Wounds to name a few, are all loved for their storylines and fast-paced Hollywood action. Most importantly, it is his genuine care for others that drives him to unselfishly give his time and financial support to many charities across the world. His support of environmental causes, animal rights, children in need and HIV/AIDS efforts is undeniable and an important part of his daily schedule. Steven Seagal is a versatile talent and an intricate human being, whose passion, selflessness, integrity, and character are embodied in his work.

None of that has anything to do with how Bitcoiin2Gen can make me rich, but I don’t care! STEVEN SEAGAL!

However, if you, for some reason, need more convincing, here’s Bitcoiin2Gen’s white paper which totally explains… nothing.