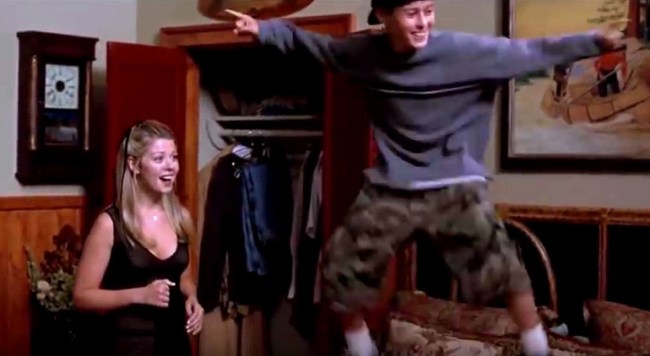 There were a lot of great performances in the 1999 comedy classic American Pie. Okay, perhaps great is stretching it a bit. But one thing is for sure, a bunch of actors and actresses got their acting careers kick-started thanks to the legendary film.

That’s a lot of star power to come out of just one single movie and I didn’t even mention The Sherminator.

Nor did I mention perhaps the greatest character in both American Pie as well as American Pie 2, Steve Stifler’s hilariously pervy little brother Matt.

How this actor, Eli Marienthal, didn’t go on to be a bigger star than the names I just mentioned is certainly one of life’s mysteries.

In fact, after American Pie 2, Marienthal only appeared in two more films before retiring from acting completely at the age of just 17.

Of course, that last role being a part opposite the 2004 version of Lindsay Lohan in Confessions of a Teenage Drama Queen may have had something to do with him deciding that, yep, he’s good.

He did come back once, for a brief cameo on The Big Bang Theory in 2009, but once again decided that retirement from acting looked like the best move.

Recently, Marienthal has been appearing seven episodes of something called The North Pole, a political comedy web series that has nothing to do with Lindsay Lohan nor The Big Bang Theory, so maybe he will stick around this time.

But since I assume that there isn’t a single one of you who has actually watched the show (or knew about its existence), here’s what Stifler’s awesome little brother, now 32-years-old, looks like today.

No way you would have known that was him, is there?

🙌🏼 Praise Be 🙌🏼 that’s a wrap on season 3 of our school program Building the Village™️! This year Back to Earth worked with over 200 kids across our partner schools, some for the first time, others who we’ve been watching grow for years. The cumulative wood burned, food ate, gratitudes given, councils held, coals got, tears shed, spoons carved, edges pushed, miles hiked, knees scraped, lakes swum, stars watched, laughs shared, lives touched is how I’m counting my blessings. Huge gratitude to the educators who took a gamble on us when we had no name, no reputation, and no experience and who trusted us with this sacred work. I’m worked. It’s working. I’m humbled. We’re thriving. And may the best be yet to come. Next up… W.I.L.D.

Just opened enrollment for our fourth season of W.I.L.D., the ceremony-based backpacking program I run with young men in the Sierra Nevadas each summer. These trips mean everything to me – my rock and my river, the service I pray to be and the healing I pray to be part of. Can’t wait to see who shows up this year, to teach and be taught, to be in the ever unfolding intimacy with creation that these journeys make possible 🏞🙏🏼📡✨ Link in bio for more info

He looks a little bit like C.M. Punk, but without someone’s fist jammed into his face.

Imagine a center, the quietest point in a mountain of granite. There is no magic to becoming a mountain's familiar, no incantation required. You are more than human enough already. The software is pre downloaded in you have all the codes written down. But if you need a hint remember: 'to breathe'

Looks like life’s been treating him pretty well without the acting.