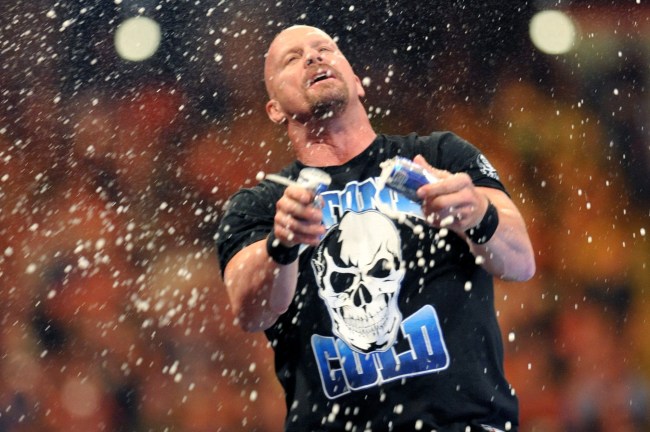 Last week, I was minding my own business when a sense of dread began to creep over me. I didn’t know what, but something was wrong. I was sure of it.

A few minutes later, I discovered the source of this unexpected disturbance. What? No. It couldn’t be.

Up to that point, I thought there were a few certainties in life. The sun goes up and down, the tides go in and out (even if you can’t explain that), and Steve Austin crushes beers.

I thought that was how the world worked. I guess I was wrong.

Thankfully, things might not be as dire as they seemed.

The wrestler announced he’d gone two weeks without a drink on his podcast last week but he returned this week to clear the air, saying that he’s just taking a temporary break to focus on getting jacked:

“I’m on a diet. That’s why I quit. When you try to drop some pounds, you get down to your desired weight, you don’t level off on the calories and throw some alcohol back in there and go hog wild, but that’s what we did every year down there in South Texas.”

“There ain’t no room in my diet for alcohol at this point in time. I didn’t swear off alcohol forever. Why in the fuck would I do that? I enjoy alcohol responsibly as an adult, so therefore I will probably drink until my final day on Earth.”

According to Sports Illustrated, Austin is limiting himself to 2,700 calories a day and is tracking his macros in order to get back into fighting shape, which I like to think means we’ll see him smashing cans while standing on the turnbuckle at some point in the near future.