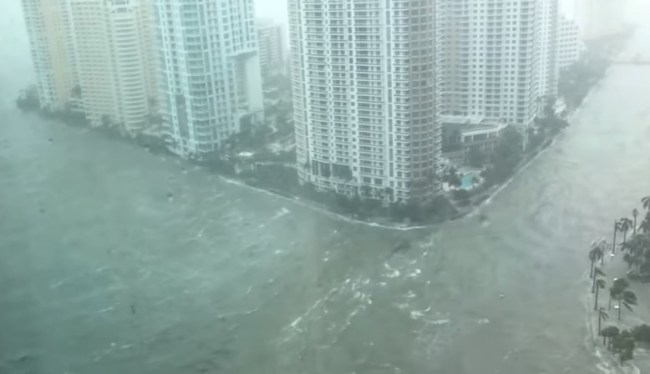 Hurricane Irma made U.S. landfall at Cudjoe Key in lower Florida Keys as a Category 4 storm at 9:10 a.m. on Sunday. By 10 a.m., more than 1 million people in South Florida lost power before the storm even made landfall in the continental United States. By 9 p.m., there were over 3.3 million people in Florida without power.

Marco Island was the point of landfall (after Cudjoe Key) for #HurricaneIrma. Trees were pounded. (@Bugz6713) #Irma #Landfall #MarcoIsland pic.twitter.com/8jW6zbq8zt

By 3:35 p.m., Hurricane Irma made another landfall at Marco Island on Florida’s west coast and soon it was underwater.

First pics of Marco Island from Irma. Our family home is under water…. so sad for everyone and their families . pic.twitter.com/b0UHs8DFM8

MARCO ISLAND….from my uncle who has a condo there (he's safe in Cape Cod). #Irma. This pic from a friend pic.twitter.com/fZvASsITYO

Photos of the damage from #Irma in East Naples FL where my family lives. Taken by our neighbor Nick Tran. Everyone is safe. pic.twitter.com/Chaq1EiVLV

Video out of Naples, Florida shows the roof of a gas station blowing off in Hurricane #Irma (Courtesy: el_arabe_official/Instagram) pic.twitter.com/q8Woor2aTD

The entire state was battered by 130 mph winds, massive storm surges, and torrential downpours that led to overwhelming flooding. Despite being on the Gulf side of Florida, Miami was ravaged by Hurricane Irma. The massive hurricane pummeled the Miami area with high winds and fast-moving flood waters from the storm surge that turned streets into rampant rivers.

Store owners in #Miami watch as their store is surrounded by a wall of water. What a terrible and uneasy feeling. #HurricaneIrma #Irma @WFLA pic.twitter.com/F0wALvDpJz

Angry waters in the Brickell area of #Miami and along the Miami River. We're live on @weatherchannel pic.twitter.com/pLP7QU5Rxi

BREAKING: Crane collapses in Miami as winds from Hurricane Irma blow in; it's one of 2 dozen in city. – AP pic.twitter.com/5vtaPI5p0X

STUNNING VIDEO: As Hurricane Irma reached Florida, a waterspout was spotted off the coast of Fort Lauderdale. https://t.co/M0i7nfnnfS pic.twitter.com/1rOtsVWgLz

Thankfully, Hurricane Irma has been downgraded to a Category 2 storm with 105 mph winds as it approaches Ft. Myers.

Over Sunday night, Hurricane Irma will endanger Tampa, but experts predict it could go down to a Category 1 storm. President Trump has approved a major disaster declaration for Florida.

Biggest gusts of the night here in Tampa. pic.twitter.com/3A1V49i54Y

Thankfully the flamingos at Busch Gardens in Tampa were being transported to safety.

SINGLE FILE, EVERYONE! Flamingos being ushered to safety at @BuschGardens, along with other animals Stay safe, everyone! #HurricaneIrma pic.twitter.com/d7ozWBndKH

Top 10 Costliest U.S. Hurricanes Ever – Experts Say Hurricane Irma Has Potential To Be Most Expensive