Study Reveals Techniques Women Use When Competitively Flirting Against Other Women 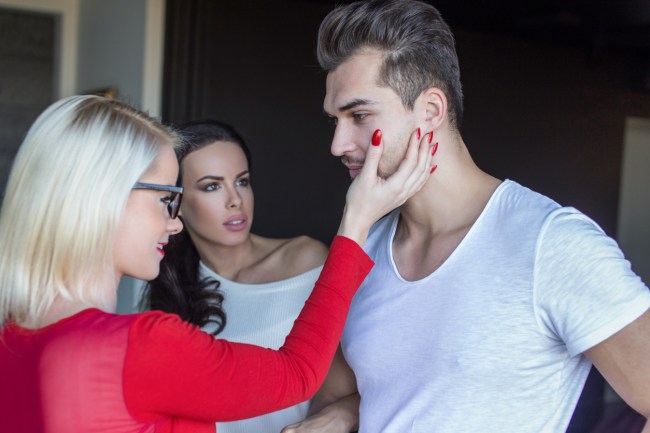 Have you ever had two women flirting with you at the same time, or what I like to call a “regular Friday night.” In the contest to woo the man, women will use various flirting techniques to squash the competition. Science says that certain flirting tactics are more effective when women are competing with other women for the same man.

The study, titled “I saw him first: Competitive nonverbal flirting among women, the tactics used and their perceived effectiveness,” was published in the Personality and Individual Differences, a peer-reviewed academic journal. Competitive flirting by women is now my new favorite sport.

Researchers studied “nonverbal actions women use to flirt competitively against each other for the purposes of accessing a mate.” Who knew being a scientist could be so fun? The study determined the “perceived effectiveness” of the flirting actions.

The study asked 91 heterosexual women their go-to flirting actions when competing for a man, and they said: eye contact with the man, dancing in his line of sight, smiling at him, touching him, giggling at his jokes, butting in between the other woman and the man, showing distaste for her (i.e., glaring, eye rolls, frowning), brushing against him, hugging him, flirting with other men, and waving to him. Where is get into a vicious catfight in the Taco Bell parking lot?

RELATED: Science Says A Woman Is Most Likely To Be Flirting With You If She Makes A Certain Facial Expression

Then researchers had 89 women and 50 men rate the perceived effectiveness of each flirting technique. The study found that the five most effective competitive flirting tactics were: touching him, initiating eye contact, hugging him, giggling at his jokes, and butting in. Well, thanks science, but any guy could have told you that touching a man is the best flirting tactic.

“I have other research investigating flirting tactics and their perceived effectiveness, as well as other research investigating how men and women signal potential mates nonverbally in mate relevant contexts. So, I have a strong interest in flirtation,” the study’s author T. Joel Wade, the Presidential Professor of Psychology at Bucknell University told PsyPost. Don’t we all have a strong interest in flirtation?

“The third author of the current study was talking to me after a class session focused on flirting and she asked me a question about how women competitively flirt with other women for men’s attention in a mate relevant situation, and I told her I was not aware of any research that had examined the topic,” Wade said. “So, we decided to do the research, and we brought in the second author, who is an international expert on intra-sexual competition among women.”

“One caveat is that the research focused on perceived effectiveness rather than actual effectiveness,” Wade added.

The researchers missed the most effective flirting tactic women use to eliminate female competitors – “accidental” pregnancy.