Studies Reveal Which Side Of A Plane People Strongly Prefer, Which Seat Choice Means You’re Selfish 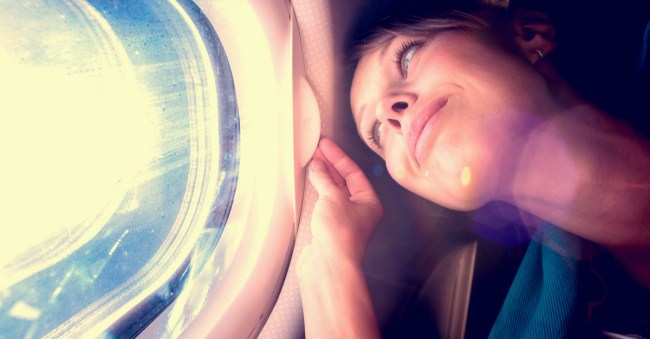 A new study by Edinburgh University has revealed that airline passengers overwhelmingly prefer to sit on one side of a plane versus the other. Psychologists have also determined that choosing a certain seat on an airplane means that you are probably a selfish twat.

Let’s hit on which side of an airplane people are clamoring to sit on first when they fly, and why.

According to a new study led by Dr. Stephen Darling, a psychology lecturer at Queen Margaret University, and carried out at Edinburgh University, airline passengers, if given the choice, almost always choose to sit on the right side of the plane.

Thirty-two people, aged between 21 and 31 years old took part in the study. There were 21 women and 11 men.

They were all right-handed and had normal or corrected-to-normal vision.

The research was the first fully controlled study looking at where people would choose to sit on planes.

The participants were asked to choose a seat by clicking on a seating plan diagram. They did this for 32 separate flights between fictional locations.

Sergio Della Sala, professor of human cognitive neuroscience at Edinburgh University, was who also part of the research team, commented that in order “to rule out the possibility that participants may have just had a tendency to click one side of the computer screen… [they were] presented with seating diagrams with the plane facing either upwards or downwards.”

What they discovered, according to the professor, was, “The result clearly showed that the orientation of the plane made no difference to the preference, with most participants still making an active choice to choose seating on the right of the plane.”

Considering that studies suggest that 88–92% of the world population is right-handed, reports Wikipedia, I suppose it only makes sense that most of us would also prefer to sit on the right.

Now then, as for which seat you choose to sit in on the plane revealing whether you are selfish or not, take a wild guess which one it is?

Ready for the answer? Alrighty, then.

“Passengers who favor the window seat like to be in control, tend to take an ‘every man for themselves’ attitude towards life, and are often more easily irritable,” Dr. Becky Spelman, chief psychologist at Harley Street’s Private Therapy Clinic, told The Telegraph. “They also like to ‘nest’ and prefer to exist in their own bubble.”

“Aisle passengers are often more sociable and definitely more amenable as people; they are also more likely to be restless fliers and less adept at sleeping on planes,” Hemmings added.

So basically, if you choose to sit in a window seat on the right side of the plane you’re like the ultimate selfish prick. Basically.