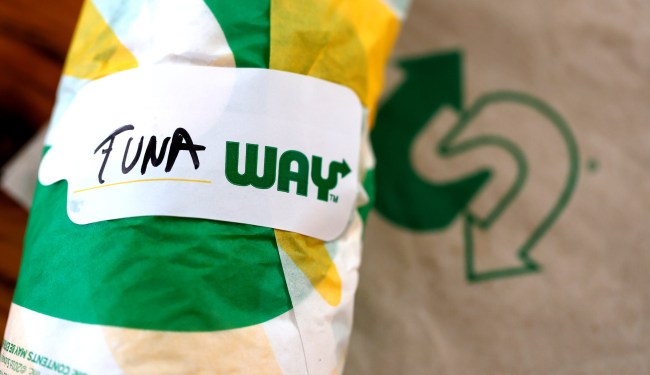 For the third time this year, a class-action lawsuit has been filed against Subway over the contents of its tuna sandwiches in U.S. District Court for the Northern District of California by plaintiffs Karen Dhanowa and Nilima Amin of Alameda County.

This third amended lawsuit, filed on Monday, states that of the 20 tuna samples collected from 20 different Subway restaurants in southern California 19 of them contained “no detectable tuna DNA sequences whatsoever.”

The Subway tuna samples did, however, contain trace amounts of chicken, pork and cattle DNA, according to lab results compiled by the Barber Lab at UCLA’s Department of Ecology and Evolutionary Biology.

The New York Post reports that the lab results in the lawsuit revealed that all 20 of the tuna samples contained “detectable sequences of chicken DNA.”

In addition, 11 of the tuna samples contained pork DNA and seven samples allegedly had cattle DNA in them.

The lawsuit added that the testing showed that Subway has been mislabeling its products by stating that its product is “100% tuna.”

If Subway’s tuna does indeed contain pork, cattle, and/or chicken DNA then claiming it is “100% tuna” would be very problematic for customers who have consumed it that also have certain dietary and/or religious restrictions.

Reuters reported on Thursday that one of the plaintiffs in the lawsuit, Amin, claimed to have ordered Subway tuna products more than 100 times from 2013 to 2019 under the assumption, after checking the menu, that she was eating “only tuna.”

“Defendants do not take sufficient measures to control or prevent the known risks of adulteration to its tuna products,” reads the lawsuit. “On the contrary, they actively perpetuate actions and steps that encourage mixing or allowing non-tuna ingredients to make their way into the tuna products.”

A Subway spokesperson once again denied the claims that their tuna is not real.

“This third, most recent amended claim, was filed only after their prior complaint was rightfully dismissed by a federal judge. Our legal team is in the process of evaluating the plaintiffs’ amended claim, and will once again file a new motion to dismiss this reckless and improper lawsuit,” the spokesperson told The Hill. “The fact remains that Subway tuna is real and strictly regulated by the FDA in the U.S., and other government entities around the world.”