Subway Worker Ruins Fraudulent ‘Vegan’ Customer’s Day When She Calls Her Out For Her B.S. 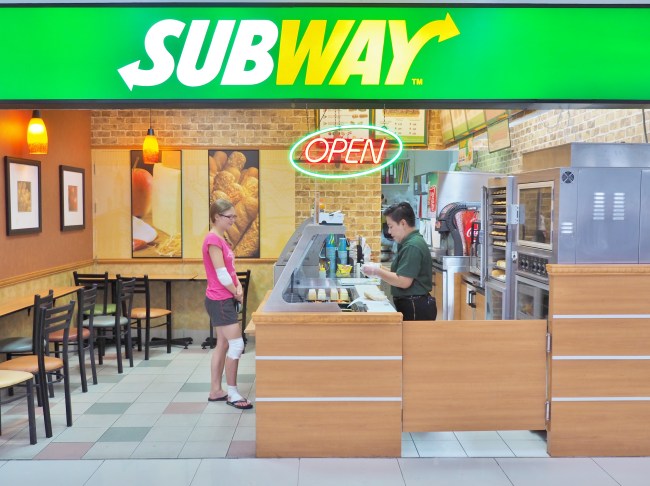 Most of us have been in a situation where, upon meeting someone, they proudly declare their ability to abstain from certain foods. “I’m a vegan!” they shout proudly, as you wipe the barbecue sauce off of your face from your brisket sandwich. You may even feel guilty for your lack of self-control, but please, do not. Because 80 percent of the time, you give that person a few glasses of white wine, and they’re inclined to strangle a squirrel for a late night fix.

“When the chips are down these civilized people will eat each other.”

If you don’t believe me, take it from a Subway Sandwiches worker named Gabriel. Gabriel was making a sandwich for a “vegan” customer when it was immediately apparent to her that the customer was full of shit.

So I work at Subway, yesterday I had a chick come in, she told me she wanted a Veggie Delight. As I went to get the bread she asked me if I could change my gloves cause she was vegan and I had been handling meat. I did that, no problem, perfectly reasonable request. I get her bread, toast it and put all the veggies she wants on it, I start to wrap up her sandwich when she says, “can I get some mayo?”

I look at her, she’s looking at me, I pick up the mayo, I’m waiting for her to be like haha jk.

Me: “You know mayonnaise has eggs in it right?”

THIS. GIRL. JUST. STOOD. THERE. SILENT.

She stood there for a second.

I felt so horrible, she stood there with such a distraught and defeated face, I had shattered this poor girl’s world.

I had a couple people waiting so I had to get this lady out of here.

She sounded so done, so defeated,

So I gave her her mayo, wrapped her sandwich up and charged her for her sandwich, she was silent the whole time. She took her sandwich and started walking out.

Me: “Thank you for coming, have a nice day!”

She just looked at me, sighed, “yea, I’ll try” and walked out.

And that’s the story of how I taught a vegan that mayonnaise is, in fact, not vegan.

Something about this story makes me feel very satisfied.