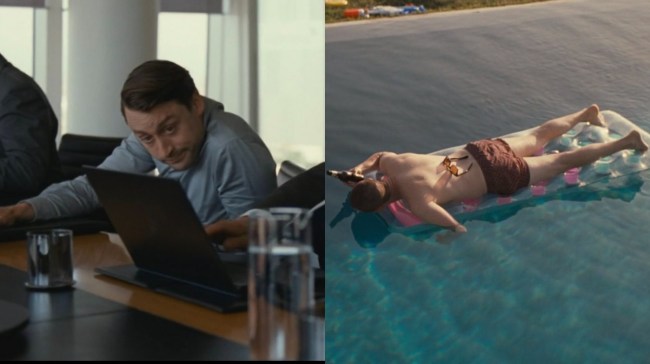 The penultimate episode of the third season of Succession, “Chiantishire”, closes with arguably the biggest cliffhanger in the history of the hit HBO series — yes, perhaps even bigger than the season two finale which saw Kendall Roy attempt to throw his father Logan Roy under the bus — as the closing image of the episode is of Kendall, face down in a Tuscan pool, on the verge of drowning.

As soon as the credits on “Chiantishire”, fans of the series took to Twitter to share their thoughts — largely their horrified reactions — to the potential death of Kendall Roy, who’s largely been the series’ main protagonist through its first three seasons. There were also plenty of jokes about the Roman Roy/Gerri Kellman plotline, which finally came to ahead after Roman accidentally sent an “item” — a.k.a a dick pic — to his father instead of Gerri.

After sleeping on it, I will be BIG TIME sad if Kendall dies — especially the manner in which it may happen — which tells me it’s probably the right storytelling choice for #Succession.

#Succession will have you like this every time the credits roll#SuccessionHBO pic.twitter.com/LBCE2TejSi

me after that episode of #succession pic.twitter.com/RBUc6askgF

me after every single sentence that comes out of shiv’s mouth this episode.
#Succession pic.twitter.com/2y2ypU4Wb3

by the end of tonight’s episode #Succession pic.twitter.com/52OS9kfqAa

the whole roy family: *freaking out over the picture roman sent to logan by accident*

#Succession will have you like this every time the credits roll#SuccessionHBO pic.twitter.com/LBCE2TejSi

this the man that called gerri “a million years old” …….. #succession pic.twitter.com/ieDi6S9C76

me after getting the realization that there's only one more episode of #Succession left pic.twitter.com/WgxnlrAwtU

The debate over whether or not Kendall dies is certainly a tricky one. On one hand, I find him and his arc to be the most compelling on the series, which does not have the luxury that Game of Thrones did in terms of multiple storylines worth following. On the other, though, wiping out Kendall as the series heads into its final season or two (it’s already been renewed for season four) would be the bravest possible storytelling choice for the series.

The season finale of Succession will hit HBO and HBO Max on Sunday, December 12 at 9 p.m. EST.