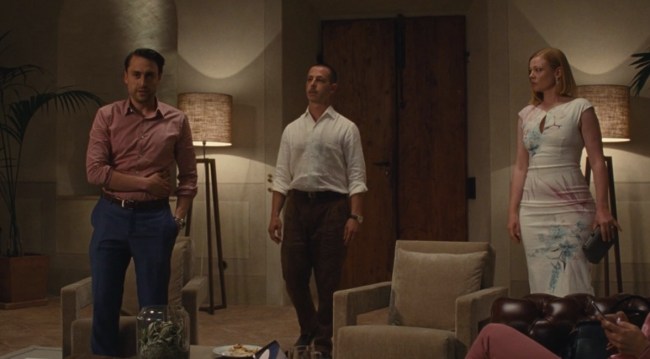 Editor’s Note: This article contains spoilers for the season three finale of Succession, “All The Bells Say”.

The third season of Succession came to a close on Sunday night and left fans shocked by how it all played out, as Shiv Roy’s (seemingly) loyal husband Tom Wambsgans sold out her, Kendall, and Roman out in order to help Logan Roy outwit them.

when Tom Wambsgans sees his wife close to making a deal pic.twitter.com/v3koNGyvQF

TOM WAMBSGANS HIVE WHERE YOU AT pic.twitter.com/80IP09Rp8j

In short, with Logan Roy on the verge of selling Waystar Royco to GoJo (the company owned by Alexander Skarsgård’s Lukas Matton), the three Roy children — Kendall, Shiv, and Roman — were planning on blocking the deal because they thought Logan would need a “supermajority” from the board to approve the deal, as were the terms of their mother’s divorce agreement with Logan from years ago.

However, after being tipped off by Tom, Logan was able to get in touch with their mother, Caroline — the whole family was in Italy for her wedding, by the way — to amend the terms of their divorce settlement, thus allowing him to sell the company without a supermajority.

Tom’s betrayal of his wife Shiv has been a long time coming but was likely accelerated by the comments she made to him last week, as she told him that he isn’t good enough for her and that she doesn’t love him. While Shiv later tried to underplay her remarks by saying “what happens in Sex Vegas…”, Wambsgans had clearly felt disrespected by her one too many times, thus pushing him over the edge towards betrayal.

With season four of Succession already greenlit by HBO, hopefully the network will have new episodes ready by this time next year.