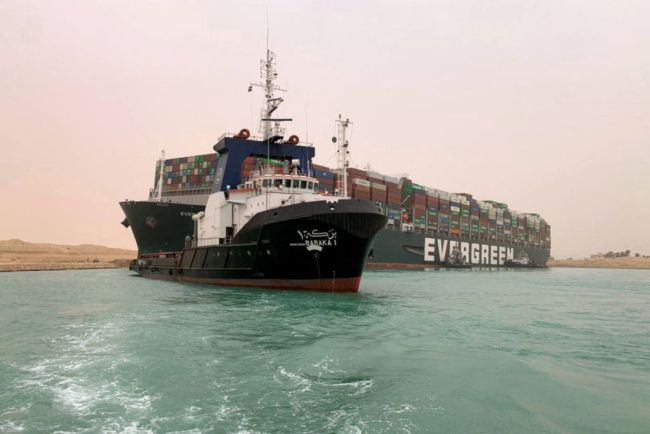 It has been several days now that the gargantuan cargo ship blocked the Suez Canal. The results have been a shipping nightmare…but it has also provided some awesome memes.

On Tuesday, a 1,300-foot mega-container vessel MV Ever Given (Evergreen) from Taiwain floated sideways and got wedged on the banks of the Suez Canal in Egypt. The massive ship that can transport 20,000 20-foot shipping containers and is one of the longest “mega-ships” currently in operation blocked the Suez Canal, and all of the cargo ships behind it. The sailing faux-pas is holding up an estimated $400 million an hour in trade, according to shipping data and news company Lloyd’s List. Lloyd’s List estimates the value of the canal’s westbound traffic is approximately $5.1 billion a day, and eastbound traffic at around $4.5 billion a day.

"Is there a traffic jam?" Answer 👇https://t.co/vD2GYX2bAG

… to mariners, canal officials have a historic reputation for 'appreciating' cartons of cigarettes…earning it the nickname "Marlboro Canal" pic.twitter.com/TXmC6v5nje

“The key to this problem hinges on how much longer it will take to move the Ever Given,” said Alan Baer, President of logistics provider, OL USA LLC. “USA importers face arrival delays of three days right now and this will continue to grow as long as the disruption continues.”

To attempt to remedy this shipping catastrophe, one single small single excavator to dig out the gigantic vessel. The cartoonish visual made for a perfect new meme format.

Anyone having an extra excavator available? pic.twitter.com/sj1pc7uQZ1

There were memes based on Austin Powers, Friends, and more.

Our future trade routes depending on the small crane trying to widen the #SuezCanal pic.twitter.com/K2b1YSLI0Q

the situation in the Suez Canal has escalated pic.twitter.com/a5UVNmuGe7

When you feel stressed at work, take a look at this tiny excavator. The burden of dredging the route between Asia and Europe rests squarely on its shoulders. #EVERGIVEN #suezcanal pic.twitter.com/mCoehqgOxc

Keeping an eye on the Suez Canal incident has shown me that no matter how bad my day is, halting global trade during a pandemic by parallel parking my 50,000 ton cargo ship in a tiny canal probably has some guy feeling a tad worse #suezcanal pic.twitter.com/EjUhYStZlY

Good news for today: whatever happens, at least you're not the guy who got his boat stuck in the suez canal and broke maritime shipping

The internet attempted to devise solutions for the stuck ship.