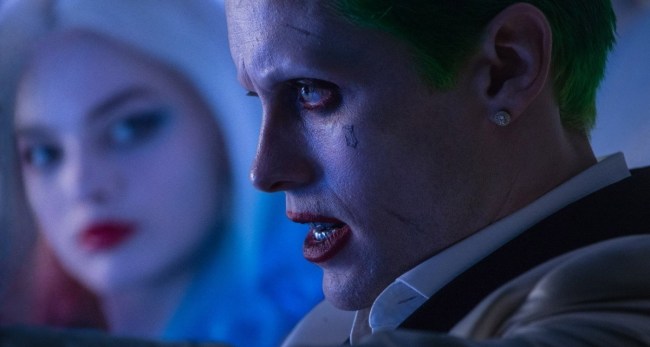 It’s been over a year and a half since the much-anticipated Suicide Squad movie hit theaters, disappointing millions of comic book and movie fans. And yet, probably because of how badly the film did not live up to its potential from pretty much every standpoint people are still talking about it.

One of those people is Suicide Squad director David Ayer, who just explained his original plan for the Joker in the film’s ending was far different than what actually ended up happening. Awesome.

Ayer has already admitted that if he could have a do-over on Suicide Squad he would have made “Joker the main villain and engineer a more grounded story.”

Another suggestion many have also made would be to have, you know, included all of these scenes involving Jared Leto’s Joker that APPEARED IN THE TRAILERS!

Now Ayer admitted over the weekend on Twitter that a key scene involving Leto’s Joker (WHICH WE SAW IN THE TRAILER) was cut out of the film that could have given the one shining star of the film, Harley Quinn, an even stronger story arc.

“After Joker dropped HQ [Harley Quinn] from the [helicopter] and crashed, Enchantress made a deal with him. He was going to take Harley home and be ‘King of Gotham,'” wrote Ayer. “Harley stood up to him and refused to betray her new friends. The Squad turned on him and he escaped.”

After Joker dropped HQ from the help and crashed, Enchantress made a deal with him. He was going to take Harley home and be “King of Gotham” Harley stood up to him and refused to betray her new friends. The Squad turned on him and he escaped. https://t.co/unnOewEYBQ

Ayer then followed up that tweet with a response agreeing with someone on Twitter who wrote, “Honestly David, if you made the movie about Harley going from being Joker’s abused pet, to breaking free of him and learning to love her new friends in the Suicide Squad, that would’ve made the movie and her arc way better.”

“That was her arc. Growth and empowerment,” Ayer replied.

That was her arc. Growth and empowerment. https://t.co/4EancRBaHl

Considering that Suicide Squad managed to somehow make $800 million at the box office, and taking into consideration how much money Black Panther is making and Avengers: Infinity War will make, Suicide Squad could have easily been a billion dollar film if the studio would have actually let the director do what he wanted to do with the film and the characters.