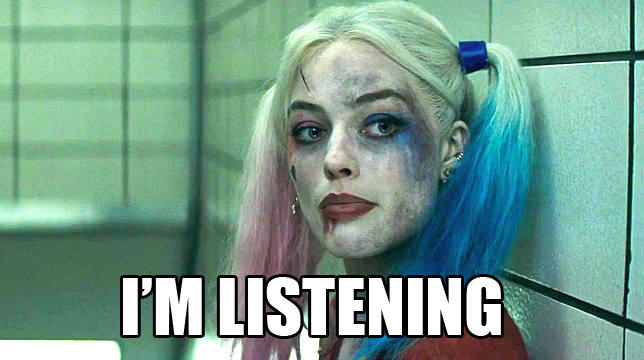 Suicide Squad, despite making gobs and gobs of money, was pretty universally panned after hitting theaters in August.

One of the most common complaints had to do with the fact that Jared Leto’s Joker, after being hyped to the moon, was barely in the film at all.

In fact, Leto was in Suicide Squad so little that someone actually wanted to sue for false advertising.

And as this video spliced together by someone on YouTube showing all the times The Joker appeared in trailers yet not in any version of the film displays, this person actually had a very valid point.

So what does he director of the film, David Ayer think about this criticism? Turns out, based on what he tweeted the other day, he’s pretty much right there with us.

I took the inspiration from the insanity of the original comics. Making a movie is a journey, not a straight line. I learned so much. People want what they want, and everyone has a personal vision of how each character should look and walk and talk. If you set out to make a mass appeal movie, it’s easy to end up with vanilla. But I went for it. And I know Squad has its flaws, Hell, the World knows it. Nothing hurts more than to pick up a newspaper and see a couple years of your blood, sweat and tears ripped to shreds. The hate game is strong out there.

Wish I had a time machine. I’d make Joker the main villain and engineer a more grounded story. I have to take the good and bad and learn from it. I love making movies and I love DC. I’m a High School dropout who used to paint houses for a living. I’m lucky to have the job I have. I have to give the characters the stories and plots they deserve next time. Real talk. (And no, there isn’t a secret edit of the film with a bunch of Joker scenes hidden in a salt mine somewhere.)

Good. He gets it. I just wish there was a “secret edit of the film with a bunch of Joker scenes.”

Oh well. At the very least we now have hope that he and DC will take these lessons and apply them to Gotham City Sirens. Because I really don’t know if I can be that disappointed in a comic book-related film again.