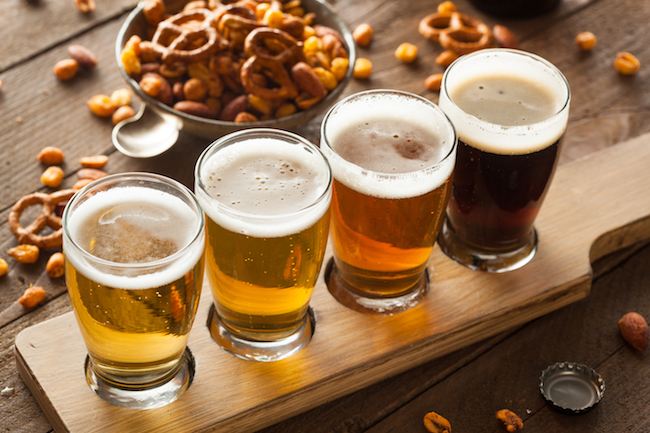 Summer is filled with limited edition ales and fruit-based beers. The perfect complement to blistering days in the summer sun or long nights under the stars.

With so many seasonal beers hitting shelves between now and Memorial Day, it’s hard to keep track or try them all. Alright, it’s slightly easy to try them all, but knowing where to start is still of utmost importance.

Bobby Cruise has worked as a sales rep for fine beers since April 2001. Before that, he cut his teeth in retail liquor store management. When the Boston native isn’t taking orders for cases of ale, he’s front and center in the thick of the action as the “official voice” of Ring of Honor.

Cruise and the rest of the Ring of Honor roster are gearing up for the Supercard of Honor show in New Orleans, Louisiana on April 7th. He took a break from both jobs to discuss summer beers to check out soon, how to find out about limited releases, his favorite ROH moments over the years and how not to sound like a moron when discussing barley and hops.

Which summer beers are worth checking out?

Lighter beers are not only great for the health-conscious consumer but also for someone who is outside doing yard work during warm weather and doesn’t want to drink anything too heavy.

I’m a big fan of Sierra Nevada Summerfest. Sierra is so well known for their top-notch ales, but Summerfest is a lager, crisp and refreshing for the warm weather months. I also love Bud Light Lime while I’m outside doing yard work in hot weather. I think the new Bud Light Orange will be just as good in that respect.

I’m also a big believer in fruity type beers during warmer months. I’m a fan of Shiner Strawberry Blonde, Ballast Point Watermelon Dorado, and Shock Top Lemon Shandy. I’m interested to see how the new Corona Premier does this Summer as it’s Corona’s answer to Michelob Ultra with lower calories and carbs. It’s a smart move with the tremendous success of Ultra over the past couple of years.

What are some tricks to getting to stores earlier for limited releases?

So many breweries are taking advantage of the popularity of social media and using the different platforms to get the word out about new releases or limited releases. I think staying on top of those various media outlets is a great way not to miss allocated releases. Also, it can’t hurt to become “best pals” with your favorite local store owner or manager.

Do you think there are almost TOO many beers on the market now?

This is like a “Catch 22” question and I’m not sure there’s a correct answer. Yes, there are tons of beers out there from macros to micros and everything in between. I like the number of options that are always available and  I look at it this way….if the product is good, people will want it, and it will stick. Only the strong survive these days in the beer business.

What are some clues that a guy doesn’t have any idea what he’s talking about when it comes to beer?

Ha! I like this question. From what I’ve seen for the most part, people are pretty intelligent when it comes to beer knowledge these days. I do laugh when people make derogatory comments about a beer that is produced in such a big way like Budweiser for example.

Some people are the “craft/micro only” type of consumer, and that’s perfectly fine, but when they crap on a beer for reasons that makes little sense. It’s kind of laughable. You don’t have to like a particular beer like Bud but don’t insult the process and the consistency of how the beer is produced because it’s very detailed and undergoes so many inspections to make sure that drinker gets the same beer time after time.

How did you get into ring announcing and working with ROH?

I started ring announcing on the New England indies in 1994 after sending out some letters to local promotions expressing an interest in being a ring announcer. I taught myself on the fly as my career progressed as well as using some things I picked up from watching Howard Finkel who will always be the best pro wrestling ring announcer ever. I was able to expand my career outside of New England thanks to meeting Steve Corino and he brought me down to Pennsylvania for his PWF promotion. Through Steve, I hooked up with ZERO-ONE in Japan as well and I announced my first live TV in Tokyo in January 2002.

Steve returned to ROH in August 2003 to feud with Homicide and he had this idea to have his own personal ring announcer, and he asked me to do it. Still, to this day, those were some of my favorite moments in my ring announcing career. After that had run its course, ROH owner Cary Silkin asked me about becoming the full-time ring announcer for the company and I started as the lead ring announcer in November 2004.

What’s your favorite story from your time at ROH?

This is such a tough question to answer anytime I get asked because I’ve been with ROH for so long. So many great matches, so much great talent, so many great fans over the years. I would just say the growth that we have achieved as a company overall has been a great story.

Going from an underground DVD company to selling out major venues for PPVs. It has been a tremendous ride, and I’m so happy to be under a new two-year contract with ROH and being able to see firsthand what is next for us.

NEXT: A College Student Invented A Bathroom Beer Shelf That Now Makes $2M A Year