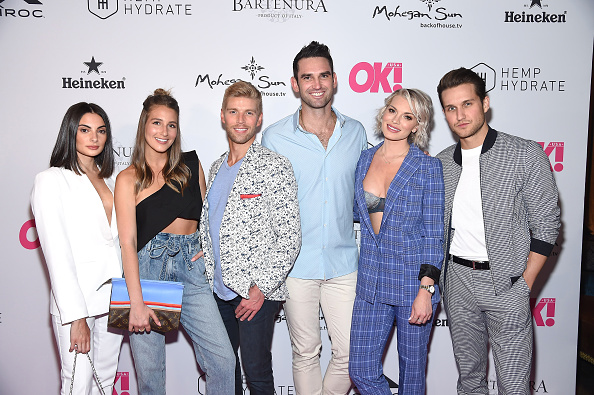 1) Do Carl and Lindsay have a chance? Or are they giving in to whims that will topple their friendship?

2) Will Hannah succumb to the siren song of Luke? Or will she stay true to Armand?

3) Can Amanda and Kyle find a way to have sex?

4) Will Paige find a way to reconcile her love for Perry with her desire to be young and independent?

5) Will Jules murder Paige and inflate her skin as a pool float?

The party that started last episode is in full-swing as Paige heads inside to cry. Jules, in her search for a purpose, finds Paige and brings her back for a shot. She tells Paige “I love you” for the 40th time, and you have to wonder when the producers are going to step in for Paige’s safety. Upstairs, Carl and Lindsay hop on a phone call with each other even though they’re only a few feet apart. It feels like that scene in The Office where Michael and Holly playfully say they’re not available for a date because they’re going out with each other that night. It’s less comfortable than having your mother walk in as you ejaculate to a scat scene (anyone else?). Through two full episodes, this was by far the hardest thing to watch.

Outside, Hannah announces that it is safe to pee in the hot tub given that the “parents” (Amanda and Kyle) are away. She then facetimes Armand (Shirt: Paul Smith. Sunglasses: Tom Ford. Blazer: Suit Supply. Eye cream: Kiehl’s.) We cut to a Hannah confessional, where she compares her feelings for Armand and Luke. Armand is her “best friend” and the guy she wants to introduce to her parents, while Luke makes her “vagina tingle.” This is news: first, I thought Paige was Hannah’s best friend, but now we hear it’s Armand? And second, did anyone know that vaginas could tingle? More importantly, when do they tingle? Near fertile soil? When a storm is coming? I’ll do some research.

The party ends and the group cleans up. Luke finds a perch next to the hot tub in which Hannah now sits, alone, marinading in her own piss. They begin a chess match of words. Luke presses Hannah to quantify her feelings for Armand on a 1-10 scale. Hannah calls it an 8, Luke scoffs, and Hannah revises it to a 7. I wish Hannah were my landlord.

The night sputters after an impromptu dance party saps the last fumes from the depleted cast. Everyone heads to bed except for Carl and Lindsay, who climb in the hot tub entirely unaware that Hannah filled it with urine. Of course, piss is considered an aphrodisiac in some cultures and within moments, Carl and Lindsay have succumbed to its sulphuric fumes. Lindsay straddles Carl and they make out in the pee. Next thing you know, they’re heading to bed and we can only guess what happens from there. My guess? Full penetration. Maybe more.

But the next morning, Lindsay tells an assembled group of gossip-gulpers that she and Carl merely kissed. I guess Hannah’s piss wasn’t that strong after all. Three of the four ladies present (Paige, Danielle, and Lindsay) have now kissed Carl, and the consensus is that he’s a good kisser. But Danielle struggles to come to terms with the new norm of Lindsay and Carl, given that she used to date him. But I don’t really feel like writing any more about Danielle, honestly. And with that, the gang packs up and heads back to New York for a week of pretending to work.

Somewhere in Brooklyn probably, we find Kyle checking on the packaging for his new sparkling hard tea, Loverboy. In a move that might come back to haunt him, he hires Crazy Carl as a salesman. I love Carl but if Carl tried to sell me anything, I’d assume it was only half-developed because of his back. Simultaneously, Amanda and Hannah shop for 4th of July costume shit at some spooky store. They debrief about their respective weekends surrounded by ghouls and shoddy wigs and it’s like they chose this place for the express purpose of making us nervous at home. I was relieved to go to a commercial break.

We return to the action as Jules and Paige go for a pedicure, and the moment Jules started talking, I decided to make dinner. Over the hum of my microwave, Paige reminds us that Jules is trying so hard. I’ve watched CrossFit Games competitions with less effort. Take (clap emoji) A (clap emoji) Breath (clap emoji) Jules. But then she talks about how her father passed away from cancer and fuck my life, right?!

Mercifully, we cut to Carl preparing for his date with Lindsay. Charmer that he is, Carl sets up candles and drinks on the roof deck of Lindsay’s building, intending to surprise her. It’s a smart move, too—by staying local, they’re only an elevator ride away from her bed. Pipe! As they settle in to enjoy the sunset over Manhattan, Lindsay pulls out a few nips of Fireball whiskey from her purse. I read once that finding nip bottles anywhere other than an airplane is a telltale sign of alcoholism. What’s more, the nip bottles don’t seem to get any emptier as the scene develops, which makes me believe they’re drinking multiple nips each. What an inefficient and environmentally wasteful method of drinking. Rotting turtle corpses notwithstanding, the booze seems to lubricate their conversation and soon, they’re talking about their favorite sexual positions. Carl says “I like to kiss during sex, so missionary” which might be the dumbest shit I’ve ever heard in my life. You ever try to thrust and kiss at the same time? Unless you have scoliosis, you’re not getting much bang for your buck. One thing at a time, pal.

You know what’s crazy about this scene? It starts at sunset. Then we cut away for a quick contribution from Carl about his parents’ divorce, and then we pick up mid-conversation again. Except now it’s dark. Um, what? These editors man; they’ll get ya.

And just while I was marveling at these editing magicians, kaaaaaaBOOOOM. Ding ding ding! Time for the fireworks we all knew were coming!! Carl gets furious when Lindsay says that he uses his parents’ divorce as an excuse for his commitment issues. He yells at her to apologize, but he’s one of those people who can smile while he’s yelling, which is confusing, like unskilled clowns. Lindsay stands up and flips out in response, telling him to calm down. At this, Carl produces yet another Fireball nip from whatever bottomless bucket of nips he has. Fuck science, this world is governed by shifting paradigms of sorcery. Lindsay storms off, and Carl tells us it’s the worst date he’s ever had. Haha damn bro, must be nice.

We come back from commercial as the two warlords cool off in separate corners. Lindsay decides to be the bigger woman and comes back to Carl, who apologizes in a tender moment. And then to bury the hatchet, Lindsay brings out—yep, you fucking guessed it—TWO MORE NIPS OF FIREBALL. Am I fucking high?! Don’t those things contain windshield fluid? I sure hope Bravo landed a massive product placement deal with Fireball because this is outrageous. Dolphins? See ya. Pelicans? Bye. Manatees? RIP. Entire ecosystems were neutralized for this scene. Thank God it was worth it, as Carl and Lindsay end their date on good terms.

Fortunately, this brings us to the weekend again. And what a Fourth of July weekend it stands to be.

Paige, in a car with Luke and Jules (ugh central), reveals that ARMAND is coming for the weekend. OH FUCKING BOY. Did somebody say… conflict? Luke can only smile wryly. By the way, I just want to note that whenever Luke greets someone, he kisses them on the cheek and then hugs them. If you’ve ever received an embrace like this, you know just how good it feels. Not from old people obviously. But from a young, charming midwesterner with a face as chiseled as Carl’s back, aka Luke? Swoon.

As the various cars arrive, the housemates bedazzle themselves in clothes that require tying. The women’s shirts look like bowties and shoelaces. And if you weren’t afraid of Jules yet, drink this in: she wears the same exact skirt that Paige wore earlier in the week. Sure, it’s all fun and games while she’s wearing Paige’s clothes. But what happens when she emerges from her bedroom one night wearing Paige? Can we all agree it’s heading there?

On the way to the restaurant, Carl says “Lindsay and I have not had sex. We are making out, and that’s where I’d really like it to be right now.” Making out. That’s his relationship status. Just when you think Crazy Carl can’t get any crazier… But the poor guy also can’t catch a break, as we transition to dinner, where he might as well have a bullseye painted on his underdeveloped pectorals. The discussion revolves around the various relationships: Amanda and Kyle are still in limbo over their impending nuptials, Hannah needs Armand to move it or milk it, and Carl’s choice to take Lindsay out on a Wednesday ruffles Paige’s perfect feathers. Why? Because she told him in a previous season that that was the night to show a girl you really cared for her. Or something. It is yet another reminder, in front of Lindsay, that Carl has cast his internet search history far and wide. All of this is too much for Lindsay, whose anger meter quickly ascends past “bitch, what?” and into “bitch, no.”

After a night at some bar or whatever, the group arrives home, makes a cursory effort at a dance party, and heads to bed. Kyle tries to put the moves on his fiancée but she’s having none of it, which leads him to tell us “I feel like I’m engaged to an 80-year-old woman who’s a hoarder.” In the morning, he tries to bring this up, in gentler terms, but Amanda stonewalls him again. So he goes to Barry’s Boot Camp—a treadmill-based dance class choreographed by a drag queen in Doc Marten boots who screams at you through a feathered headset—to sweat out his backed-up seed. Luke and Carl dance too, as the girls stagnate in their dirty blankets until 11AM.

When the guys return, the house prepares for their big 4th of July bash. Pool floats are inflated and streamers are hung from the railings. Meanwhile, Kyle tries to voice his frustration to Amanda over their lacking love life, but she won’t have any of it. Their tension escalates, and we can’t help but wonder: is this it? Is this the moment where it all goes to shit? Will she punch him in the shaft, only to have it ricochet back and thwack her in the forehead like an oblong speed bag?

Find out next week on Summer House!