Surviving Backyard BBQ’s This Year Without Getting The Big Rona 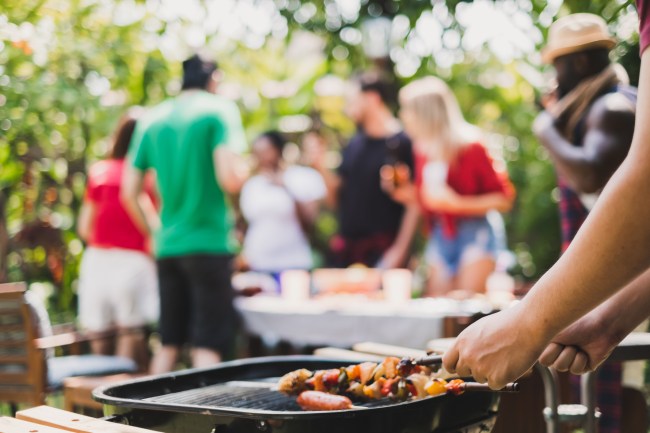 It may not have looked like it was going to happen a few months ago, but it would appear that summer has finally arrived. It means that our regularly scheduled program of boats, brews and backyard BBQs is now underway. Oh-boy-oh-boy-oh-boy! We laugh in the face of the sickness that’s still presently crawling around out there among us, and we’re more than ready to have some fun.

Yes sir, despite scientific minds having failed at producing a vaccine or a cure for that pesky little bug that made us all stir crazy and borderline alcoholic over the Spring, the majority of America has thrown caution to the wind and ventured outside. Some diehard believers of the ick, however, are putting on masks and taking other precautionary measures before leaving the house to ensure they don’t end up on a respirator before August. You’d be surprised, though, how many of those same people are going to eat questionable food at the social functions they’ll attend from now until Labor Day and wonder why they are walking away with a raging case of the yaks.

Not only does the Centers for Disease Control and Prevention (CDC) have guidelines for dodging the rona, they also have some for avoiding the BBQ flu. The federal agency says roughly 48 million Americans suffer gnarly sicknesses each year as a result of foodborne disease. Some 128,000 people are hospitalized because of food poisoning, and another 3,000 die from it. That’s right, belly-up dead, all because they trusted the potato salad a little more than they probably should have. After all, food safety rules are often the last thing on people’s minds at backyard events.

Yet, health experts say to be careful.

“BBQ’s and potlucks can be a breeding ground for food poisoning and contamination,” said Dennis Kan MS, RN, CIC, Pediatric Infection Control Practitioner. “Not only are you relying on others to safely and cleanly prepare food you’re about to eat, once it’s there and the party is in full-swing, perishables sit out too long, growing all kinds of bacteria that have the ability to make you sick.”

You’ll know when food poisoning strikes, too. It can cause severe stomach cramps, vomiting and diarrhea.

Yikes! If you’re like us, you want to avoid having to leave the party early because of a bad case of the squirts. One of the best ways to achieve this is by arriving before the food is served. Getting to almost any other social gathering fashionably late might be part of your charm, but this could spell trouble at those outdoor events — especially if you show up ready to chow down.

Any food that has been sitting out for hours is probably not fit for human consumption. Not the burgers, not the salads, not the desserts, none of it. Sure, the hosts will likely tell you, “it’s fine,” but putting all of your trust in someone who’s had sixteen beers and a Jager shot isn’t the best move.

According to the United States Department of Agriculture Food Safety and Inspection Service, dangerous bacteria starts growing on food once the temperature reaches between 40 and 140 degrees Fahrenheit. This is known as the danger zone since it provides an optimal environment for nasty bugs to start breeding. So, if you dip in at a buddy’s BBQ and the food that is supposed to be cold isn’t, and the meats and mac n’ cheese are not hot, eating should be avoided at all cost.

As a rule, when it’s hot outside, do not consume any food that has been left out longer than an hour. The Food and Drug Administration even recommends that food sitting out more than two hours be thrown away. This means unless food items like potato salad have been iced down and the burgers and dogs are kept warm, you’re probably better off just hitting a taco joint on the way home.

If the backyard BBQ is one of those parties that just never seems to end, you might be offered leftovers at some point. Now, while the beer munchies might make it difficult for you to refuse these culinary petri dishes, you’ve got to know that there could be a stomach-churning sickness waiting if you dig in. It’s possible that the food wasn’t looked after properly when it was put away at the end of the night, and the host essentially stuck a bunch of bacteria-infested garbage in the fridge. It might taste good going down, but there’s a distinct possibility that you and that bratwurst will meet again later that night. And the circumstances are going to be a lot less pleasant. It would pay to be a leader here and just convince the whole drunken crew to order some pizza once everyone starts getting hungry. At least then you have a fighting chance of survival.