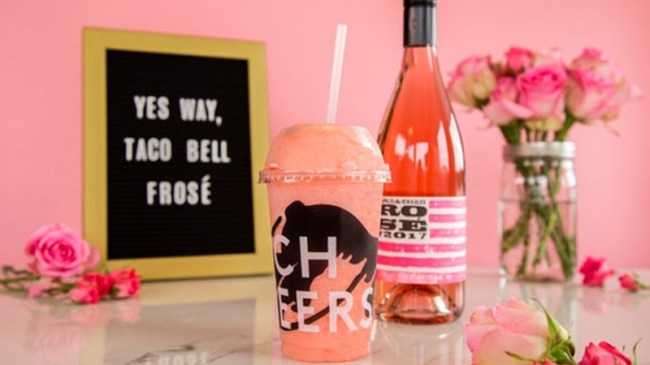 If you thought Taco Bell was just a place to get inexpensive chalupa supremes and Doritos cheesy gordita crunches, then you are sadly missing out on all that the fast-food giant offers. The Bell has been upping their alcoholic beverage game over the past few years. Taco Bell sells their own beer, sangrias, and mixed drinks with vodka, rum or tequila. Now, Taco Bell is going hard after your girlfriend by offering frosé.

Taco Bell is selling the Berry Frosé Twisted Freeze, which is a boozy frozen drink composed of Charles & Charles rosé wine blended with a combination of berry flavors. The Bell says their new Instagram-worthy adult beverage is “a tasty, strawberry-forward, easy-to-sip summer treat.” Taco Bell’s 16-ounce Berry Frosé Twisted Freeze will cost $7.99. If your girlfriend wears shirts that say “Rosé All Day,” what better way for her to wash down a crunch wrap than with some cool and refreshing frosé?

However, there’s a catch because there’s always a catch. The Berry Frosé Twisted Freeze is currently only available at two Taco Bell Cantina locations: Dearborn Park in Chicago and Newport Beach in California. But if the test goes well, the wine slushy will be available at more Cantina spots. Taco Bell believes selling alcohol is the future of the chain and already has plans to launch 300-350 new cantina-style locations between 2017 and 2022.

If you don’t live near those two locations, you can always head down to your local Costco and pick up these vodka freezer pops.