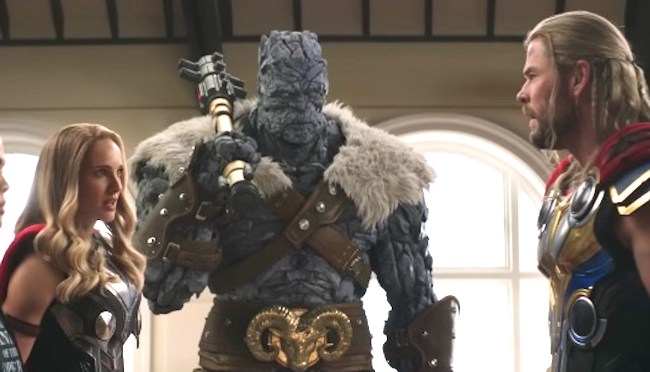 It’s been a shaky year for the Marvel Cinematic Universe, to say the least.

Since last summer, the MCU has released six movies — Black Widow, Shang-Chi, Eternals, Spider-Man: No Way Home, Doctor Strange in the Multiverse of Madness, and Thor: Love and Thunder — and the reactions to the various projects have been largely all over the map, which has certainly been a departure for the usually consistent franchise are used to. And that’s not even mentioned the mixed results of the television experiment over on Disney+.

Take Eternals, for example, which some fans believe is the worst MCU films ever made. Yes, even worse than Thor: The Dark World. Speaking of Thor: The Dark World, which has a 66% critics score on Rotten Tomatoes. And unfortunately for Marvel, Love and Thunder — a direct sequel to Thor: Ragnarok, which is widely thought of as one of the MCU’s best movies — curretly sits at a 67% on RT, making it one of the worst-reviewed MCU films ever made.

One of the major complaints aimed at the MCU over the last 12 months has been the quality of the CGI, which many fans believe is worsening due to Marvel’s increaded production in recent years. Hell, even Taika Waititi, the director of Thor: Love and Thunder, publicly poked fun at the quality of CGI in Thor: Love and Thunder. Can’t imagine neither Kevin Feige nor Mr. Mouse is all too pleased with that.

Taika Waititi and Tessa Thompson mock the CGI and editing in Thor: Love and Thunder

Taika Waititi and Tessa Thompson poke fun at #ThorLoveAndThunder’s editing and CGI in this excerpt from a Vanity Fair interview pic.twitter.com/KKTW2UvaRW

You neglect your precious life and connections to finish a shot on time for Marvel, so Taika Waititi can poke it with his finger and go 'does this look real?' https://t.co/NEkXWSub6B

RELATED: Marvel President Kevin Feige Reportedly Warned Sony Against Doing… Whatever The Hell It Is That They’re Doing