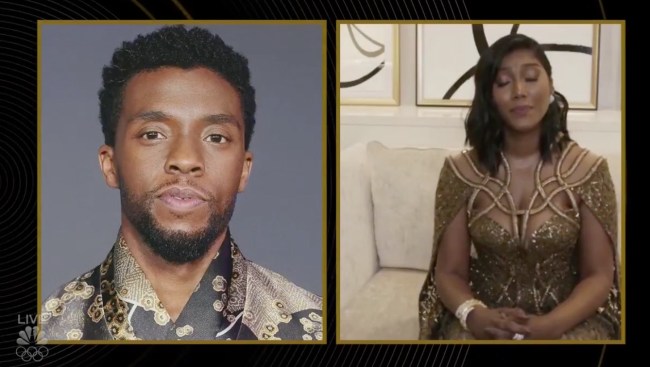 In easily the most emotional moment of the night, Chadwick Boseman’s widow Taylor Simone Ledward accepted his Golden Globe award for Best Actor in a Motion Picture, Drama, following the actor’s tragic death back in August after a four-year battle with colon cancer — a battle he largely kept private, thus making his sudden passing all-the-more shocking.

Boseman’s wife Taylor Simone Ledward was on hand to accept his much-deserved award and gave an emotional, moving speech in his honor.

Taylor Simone Ledward accepts the award for Best Actor in a Motion Picture, Drama on behalf of her late husband Chadwick Boseman at The #GoldenGlobes. pic.twitter.com/uz20f1kPHi

He would say something beautiful, something inspiring, something that would amplify that little voice inside of all of us that tells you you can, that tells you to keep going, that calls you back to what you’re meant to be doing at this moment in history.

And I don’t have his words, but we have to take a moment to celebrate those we love. So thank you HFPA for this opportunity to do exactly that. And, hun, you keep ’em coming. Thank you.”

Following his Golden Globes win, Boseman now likely becomes the odds-on favorite to repeat the feat and win the Academy Award for Best Actor at the Oscars in late April.

You can stream Ma Rainey’s Black Bottom (and also the excellent Da 5 Bloods, which Boseman also shines in) on Netflix. Rest in Peace, Chadwick.